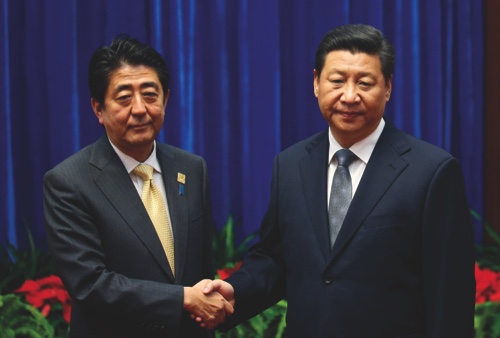 Japan’s Prime Minister Shinzo Abe, left, and China’s President Xi Jinping, right, shake hands during their meeting at the Great Hall of the People, on the sidelines of the APEC summit

What happens next in Japan-China relations depends not only on what they do, but also on what they don’t do.
A tentative, some would say grudging, first meeting between their leaders on Monday raised hopes of a gradual improvement in ties, but any misstep on two fundamental issues could send the relationship back into deep freeze.
China wants Japanese Prime Minister Shinzo Abe to refrain from visiting a shrine that honors Japan’s war dead, including convicted war criminals. He did so last December, on the first anniversary of taking office, and a repeat visit would infuriate China after President Xi Jinping acquiesced to a meeting with Abe during an Asia-Pacific summit in Beijing.
Considering Abe’s “less-than-glorious track record,” the official China Daily newspaper said in an editorial yesterday, pleasant-sounding rhetoric needs to be followed up by action for the thaw to take hold. Action, in this case, is as much about what China wants Abe not to do.
Japan is hoping the detente will lead to at least one concrete step, the establishment of a hotline to manage any incidents at sea or in airspace over islands that both countries claim, to prevent them from developing into a serious crisis or clash.
Japan’s nationalization of the islands in 2012 infuriated Beijing. Chinese ships regularly sail into the waters around the islands, challenging Japan’s sovereignty, and are chased away by Japanese coast guard vessels.
In his 30-minute meeting with Xi, Abe proposed an early launch of a maritime crisis mechanism, including the hotline and other measures, Japanese Defense Minister Akinori Eto told reporters yesterday. Xi responded favorably, saying the two countries already have a basic agreement and should work out the details, Eto said.
The Japanese defense minister said he wants to start work on the mechanism as soon as possible, and “the ball is in their court.”
Analysts said they believe the mechanism, which has been under discussion for years, could become a reality.
“The commitment to a maritime crisis management hotline is actually symbolically the most important, as well as the key practical outcome,” said Corey Wallace, a maritime security expert at the University of Auckland in New Zealand.
Economically, the leaders’ meeting was welcomed by Sadayuki Sakakibara, the chairman of the Japan Business Federation, known as Keidanren. He noted that political and diplomatic ties impact economic relations too.
But no substantive progress was made on the larger issue of the territorial dispute itself, involving a group of small, uninhabited islands called Senkaku by Japan and Diaoyu by China.
Former Japanese diplomat Kazuhiko Togo said until that situation is resolved, “the fundamental instability and fundamental fragility of our relationship continues. So that has to be remedied, but how and when, nobody can tell.”
Xi, who hosted Abe and other world leaders at the Asia-Pacific Economic Cooperation summit, looked unhappy to be shaking hands with Abe before their meeting, but Japanese analysts didn’t portray it as a snub. Rather, they said Xi probably had to play to his domestic audience.
Japan is happy that the two leaders met, under any circumstances, even if no real headway was made on the territorial dispute. Both sides realize that the meeting was a small first step.
“China is not the easiest neighbor to get along with,” a front-page column in Japan’s left-leaning Asahi newspaper said yesterday. “But it is a fact that we are neighbors, and since neither country can relocate, the only thing we can do is thaw the frozen water in the well if we want to drink from it. Could any cracking of the ice be heard at the Abe-Xi summit?” Ken Moritsugu, Tokyo , AP