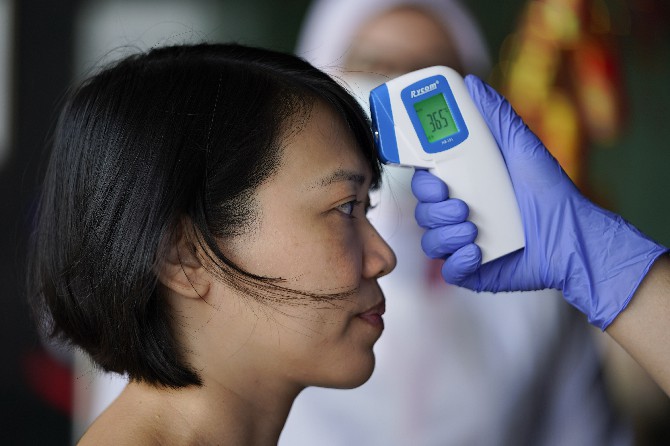 On the sixth day since the last confirmed case of novel coronavirus infection in Macau was reported, the health authorities remarked on the efficiency of the measures taken to contain the outbreak, but did not discount the possibility of asymptomatic cases of local infection.
“We have reached now the sixth day without any new case [of infection]. We can say that our measures were effective, but that doesn’t mean that the situation has been tackled,” said Lei Chin Ion, the director of Health Bureau (SSM), during yesterday’s daily press conference organized by the New Coronavirus Contingency Coordination Center. “[The current situation] is still serious and we can’t return yet to our normal life.”
The director of SSM also said that the risk posed by the virus is still very high.
“There are many cases of confirmed infections by the virus [outside Macau] of people who traveled in Macau and who have never been to Hubei province. There are a total of 29 cases like this.”
According to the director, “this means that in Macau there are some hidden cases that we haven’t found yet.”
The head of the local health authority said that the main task of the SSM is to identify and treat these cases as soon as possible to prevent further transmission of the disease. The nine patients currently undergoing treatment and those under surveillance no longer require much assistance from health services.
Questioned by the media, the Coordinator of the New Coronavirus Contingency Coordination Center, Leong Iek Hou, explained that there are currently 29 reported cases that have a connection to Macau despite having been reported outside the special administrative region.
Of these, 22 have been reported in the city of Zhuhai, three have been reported in Hong Kong, one case has been reported in Taiwan, and as of yesterday, there are three new cases; a Malaysian national who worked in Macau and two South Korean tourists. Local health authorities reported receiving information about the new cases only a couple of hours before the press conference and are still gathering information.
Regarding the patient detected in Malaysia, Leong said that he left Macau on February 1 and that he began showing symptoms of the disease two days later, leading local authorities to consider the potential risk of infection in Macau caused by this person as low.
Still, the government is in contact with its Malaysian counterpart to find out more about this patient, including details on where was he working while in Macau and which flight he took on his return to Malaysia.
At the same time, the SSM is trying to gather the list of passengers on the Air Macau flight NX826 to Seoul Incheon from January 31, the flight taken by the two South Korean nationals who, after staying in Macau, tested positive for the 2019-nCoV back in their home country.
According to Leong, the SSM will contact all of the passengers on the list and will pay particular attention to those seated on the two rows of seats immediately in front and behind these passengers as they are considered to have had “close contact with the infected” and “need to be in isolation.”
The same respondent said that since 10 days have passed since the potential infection moment, the rest of the passengers should just pay attention to their physical condition until the incubation period of the disease concludes.
Director Lei gave the example of a family of nine that became cross-infected in Hong Kong at a gathering for a hot pot dinner. He remarked that concentrations of people in a small enclosed place heightens the risk of transmission.
According the information disclosed yesterday, so far Macau health authorities have conducted a total of 691 tests for the virus. Some 111 tests were conducted within the past 24 hours, with about 60% of the subjects tested at the public hospital and the remainder at Kiang Wu Hospital.
In response to fears about concealed cases, Coordinator of the Emergency Division of the Public Hospital, Chang Tam Fei, stated that the authorities are now expanding the range of tests to other people suspected of being infected.
“Before we only tested people who had been in the places considered high risk. Now we will test everyone that has symptoms that match with this virus and we are also actively seeking hidden cases in the society of people that might have had close contact with the infected patients,” said Chang.