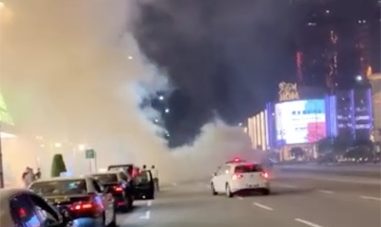 A small truck was found emitting an unusual quantity of smoke in front of the main entrance of the L’Arc Hotel in NAPE on Saturday evening. The case was handled by the Fire Services Bureau (CB) and the Public Security Police Force.

The Times received a video of the incident sent by a reader on Saturday night, capturing a fire in front of the NAPE hotel.

Contacted by the Times, the Fire Services Bureau replied promptly, noting that a report was received on Saturday. The department thus deployed a team to handle the situation.

Upon arrival, the team found that the incident was caused by problems with the truck’s exhaust system. The Fire Services Bureau determined that the smoke was not caused by a fire. They were also unable to find signs indicating a burning fire.