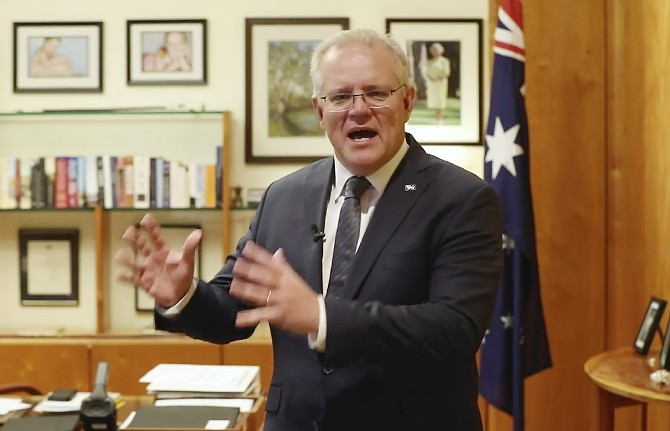 Australian regulators have ruled out prosecuting TikTok over an apparent suicide video under tough new laws prohibiting some forms of violent online images, but the prime minister urged social media companies yesterday to take more responsibility for offensive content.
The Chinese-owned social media platform says it is working to remove videos of a man apparently taking his own life with a gun and banning users who keep trying to spread the clips through the app.
It’s the latest example of the ongoing struggle by big tech companies to police their platforms for harmful content amid increasing pressure from regulators.
Prime Minister Scott Morrison said eSafety Commissioner Julie Inman Grant, Australia’s online watchdog, is taking “strong action” against what he described as a “disgraceful video.”
“Those who run these organizations have a responsibility to those who are watching and particularly when it comes to children,” Morrison said in a video released by his office.
“My message to those social media companies is, yes, your products are changing the world, but with that comes a great responsibility and you need to be accountable and you need to be responsible for making sure that your product does not harm Australians, and my government will be making sure that we do everything to hold you to account for that,” he said.
Australia last year took extraordinary legislative steps to remove violent content from internet platforms.
Social media executives can be imprisoned if their platforms stream real violence under the new laws. The legislation was a response to an Australian gunman who used a helmet-mounted camera to broadcast live on Facebook as he murdered 51 worshippers in two mosques in the New Zealand city of Christchurch.
But the eSafety Commissioner’s office said TikTok could not be prosecuted under the laws.
“The video is not considered abhorrent violent material -– because it is not violent terrorism, murder or attempted murder, rape, torture or kidnapping,” the office said in an email.
The office is working with social media companies to “to remove content and monitor the situation,” Inman Grant said in a statement.
“Social media companies need to use the tools at their disposal to detect and remove this content much more quickly,” she said.
Morrison’s criticism of TikTok comes after he distanced Australia from the U.S. stance on the company behind it, ByteDance.
President Donald Trump’s administration has threatened to ban TikTok by mid-September and ordered ByteDance to sell its U.S. business, claiming national security risks due to the Chinese ownership.
Morrison told the Aspen Security Forum in the United States last month that TikTok did not compromise Australia’s security interests, a move that pleased China.
He took the extraordinary step of attacking TikTok in a video a day after the last two Australian journalists working for Australian media left China for fear of detention and the Chinese foreign ministry announced Australian citizen Cheng Lei, a Chinese state media journalist, had been detained because she was “suspected of carrying out criminal activities endangering China’s national security.” ROD McGUIRK, CANBERRA, AP