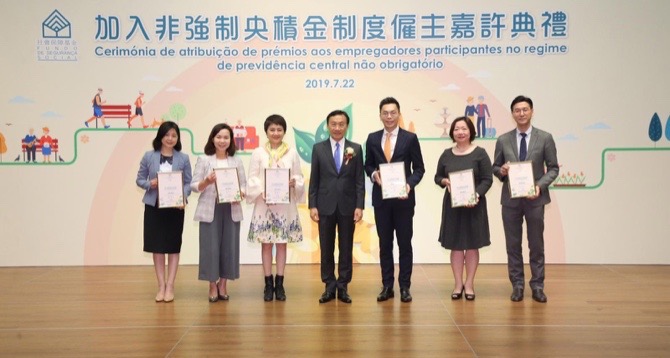 An event was held yesterday by the Social Security Fund (FSS) to honor companies currently participating – or intending to participate – in the non-mandatory provident fund scheme. This was the second iteration of the event.

The provident fund was started on January 1, 2018. The FSS disclosed that a total of 186 companies have joined the joint provident fund scheme in the last year and a half. At the ceremony, another 21 employers also expressed their support and intention to participate in the scheme.

In his speech, Iong Kong Io, president of the Administrative Committee of the FSS, recalled that the first employer recognition ceremony was held in July last year to commend the first 78 participating companies. He especially made note of the fact that all six casino operators had committed to the provident scheme.

There are two ways a company can participate in the scheme. For companies that have an existing provident fund scheme, they can easily transfer to the new scheme with minor adjustments – 77% of participating companies have started under this mechanism. Other companies can simply sign up to the scheme through the seven investment institutions or policy providers, including five insurance companies, one bank and one investment management firm.

Given that the scheme is a relatively new policy, the majority of the participating employers agree that a thorough explanation has to be given to employees to ease their concerns.

“It took us quite some time to convey the advantages of the scheme to all our employees,” said Rachel Chan, senior vice president of human resources at Sociedade de Jogos de Macau, S.A. (SJM), the first casino operator to join the new scheme.

Meanwhile, Zheng Jie-zhao, principal of the Workers’ Children High School Macau, complimented the new scheme: “Investment won’t get suspended even if an employee changes jobs, and there are wider investment choices.”

As for the individual provident fund scheme, the FSS has so far received more than 46,200 applications.

Also yesterday, a committee of the Legislative Assembly discussed a pension fund for civil servants only. The discussion revolved around the financial and investment conditions, as well as the Government Pension Fund’s ability to make payments in future.

Committee president Mak Soi Kun told the media after the meeting that the fund is currently recording deficits. As such, civil servants have become worried that their pensions may not be paid when they retire.

Mak said the committee has yet to receive the actuarial report of cash flow from the fund, which the fund said would be submitted to the committee no later than July.

In the meantime, the committee has suggested that the fund’s balance sheet should be published along with its appendices, following normal accounting principles, starting with the sheet for the 2018 financial year. This way, people will be able to understand the fund’s actual financial status.

The committee also recommended immediate action by the government to safeguard the health of the fund. Staff reporter