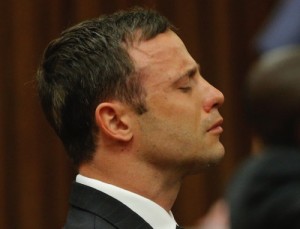 Oscar Pistorius reacts in the dock in Pretoria, South Africa

The judge in Oscar Pistorius’ trial said yesterday he can’t be found guilty of murder but that he was negligent in the killing of girlfriend Reeva Steenkamp, raising the possibility that the double-amputee Olympian will be convicted of culpable homicide.
Judge Thokozile Masipa said she felt Pistorius acted negligently when he fatally shot Steenkamp. She then stopped delivering her judgment and adjourned until today when a formal verdict in the case that has riveted much of South Africa and the world is expected.
While the judge did not announce any formal verdicts she indicated Pistorius would not be convicted on premeditated murder or a lesser murder charge, but that may be vulnerable to being convicted of culpable homicide, or in other words a negligent killing.
“Culpable homicide is a competent verdict,” she said.
That normally carries a five-year jail sentence in South Africa, but it can be changed by a judge depending on the specific circumstances of the killing. If convicted of culpable homicide, Pistorius could serve as many as 15 years in prison.
Pistorius cried on the shoulders of his sister Aimee after Masipa adjourned the court.
Pistorius gave different explanations about why he fired at the door in his bathroom in his Pretoria home, Masipa said. He testified at one point that he fired without thinking and at another that he was shooting at someone he believed was about to attack or kill him. She called him “a very poor witness.”
Masipa rejected the defense’s contention that the shooting was a reflex and the Paralympian lacked cognitive capacity.
Earlier, Masipa, 66, said she discounted the witnesses who testified that they heard a woman scream after the four shots Pistorius fired at a door in his bathroom, saying because of the gravity of her wounds, Steenkamp wouldn’t have been able to shout and shriek. Some of them were also too far away.
“I am of the view that the probability is that some witnesses failed to separate what they knew personally, from what they heard from other people or from what they gathered from the media,” she said.
Known as the Blade Runner because of his J-shaped prosthetic running blades, Pistorius was the first double amputee to compete in the Olympics. He’s been free on 1 million rand (USD91,500) bail since February last year. If found guilty, Pistorius’s bail will be revoked and he will have to submit a new application, according to Ulrich Roux, a director at Johannesburg-based BDK Attorneys.
The charges have derailed the running career of the winner of six Paralympic gold medals and cost Pistorius sponsorship deals with Nike and  Oakley. He sold his home in Pretoria in May.
If the verdict is guilty for culpable homicide, the state and defense teams will request time to compile evidence for sentencing, which will probably be six to 12 weeks after the verdict, Marius du Toit, a criminal-defense lawyer based in Pretoria, said in an interview.
The athlete has also pleaded not guilty to three separate gun-related charges, which include firing a weapon in a restaurant and shooting out of a car. He could face sentences ranging from as many as five years to a fine for each count. AP/Bloomberg