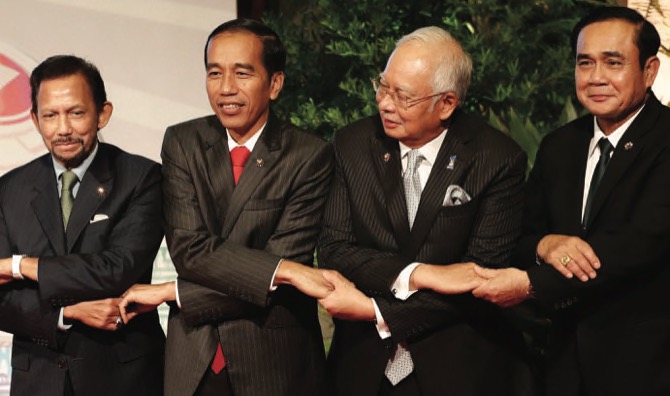 Southeast Asian nations avoided mention yesterday of China’s construction of islands in the South China Sea and a U.N.-linked arbitration ruling that invalidated Beijing’s claims in the disputed waters in the latest show of China’s regional clout.

President Rodrigo Duterte, speaking on behalf of fellow heads of state of the Association of Southeast Asian Nations, also expectedly skirted any expression of alarm over serious human rights concerns in the region, including the plight of Rohingya Muslims in Myanmar and his deadly anti-drug campaign in a statement following their annual summit Monday in Manila.

Such statements have been made public shortly after the annual gatherings of leaders of the 10-nation bloc but there was no immediate explanation for the three-day delay, which drew the attention of some Manila-based diplomats. The few instances of delays in the past were caused by differences over wording on long-thorny issues, like the territorial rifts.

China, which wields considerable influence on ASEAN, has steadfastly opposed criticism of its artificial islands, where it has reportedly installed a missile defense system despite widespread concern, including by the United States, Japan and Australia.

Duterte, who took office last year and assumed ASEAN’s rotational chairmanship this year, has openly tried to court China’s friendship, trade, investment and infrastructure financing. He has toned down sharp rebuke of China’s assertive actions in the strategic waterway, one of the world’s busiest, and refused to immediately seek Chinese compliance with an arbitration ruling last year that invalidated its vast claims in the South China Sea on historical grounds.

His rapprochement turned the Philippines from being one of Beijing’s sharpest critics in the disputed sea.

In the ASEAN statement, Duterte repeated previous calls for a peaceful resolution of the disputes, adherence to the rule of law and welcomed the approval of a framework or outline of a proposed “code of conduct” aimed at preventing confrontation in the contested waters. Deadly clashes have erupted in the past between Chinese and Vietnamese forces.

With an agreed outline, first proposed 15 years ago, negotiations could now start for the regional code, according to a joint statement by ASEAN and China whose leaders met Monday. Both sides agreed to start the negotiations early next year and conclude the talks as soon as possible, with Duterte taking a position that the code should be legally binding, presidential spokesman Harry Roque said.

“We further reaffirmed the need to enhance mutual trust and confidence, emphasized the importance of non-militarization and self-restraint in the conduct of all activities by claimants and all other states […] that could further complicate the situation and escalate tensions in the South China Sea,” the statement said.

While ASEAN’s decision to adopt a non-confrontational approach promotes friendly relations with China, it may not foster the rule of law, said Malcolm Cook, a senior fellow with the ISEAS Yusof Ishak Institute in Singapore.

“It is bad because it clearly places the political expediency of good relations with China over holding China to fulfilling its commitments under international law,” Cook said. “Short term expediency trumps long-term principle.”

On human rights, ASEAN “welcomed the commitment by Myanmar authorities to ensure the safety of civilians, take immediate steps to end the violence in Rakhine, restore normal socio-economic conditions, and address the refugee problem through verification process” in language devoid of the alarm expressed by some governments amid deadly conditions threatening the Rohingya. Jim Gomez, Manila, AP