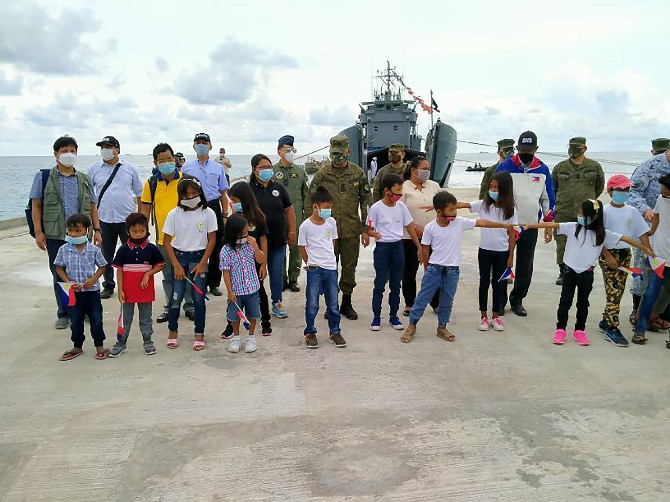 Defense Secretary Delfin Lorenzana (4th from right) and the other military officials are welcomed by residents at the newly built beach ramp at the island of Pag-asa, also known as Thitu

The Philippine defense chief and top military officials flew to a disputed island in the South China Sea yesterday to inaugurate a beach ramp built to allow the “full-blast” development of the territory in a move likely to infuriate China.
Defense Secretary Delfin Lorenzana brought journalists to witness the ribbon-cutting ceremony on the island, internationally called Thitu, in what he said was a milestone in efforts to make the island, long occupied by Filipino forces and fishermen, more livable without militarizing it.
The island, which Filipinos call Pag-asa, or hope, lies near one of China’s man-made islands in the Spratlys, the most hotly contested area of the South China Sea.
Lorenzana said the Philippines has the right to develop its nine occupied islands as other claimants have done. He played down the prospect of a hostile Chinese reaction, citing cozier ties between Manila and Beijing under President Rodrigo Duterte.
“This is a disputed area,” Lorenzana told journalists on the island in remarks provided by the Department of National Defense. “The Chinese have said that they will not attack us so we’re safe here.”
The beach ramp will allow Philippine navy and cargo ships to dock and unload construction materials and heavy equipment for new projects, including the repair of a seawater-eroded airstrip. Military barracks, more civilian homes, a school, an ice plant for fishermen, solar and diesel power supplies and a radio station for weather reports are also planned, Lorenzana said.
A fishermen’s shelter is being completed with plans for it to be inaugurated on Friday when the Philippines marks its Independence Day, he said.
With the beach ramp now usable, “we can go full blast,” the defense chief said.
China, the Philippines, Vietnam and Malaysia have had increasingly tense territorial spats in the region in recent years after China turned seven disputed reefs into missile-protected island bases, including three with runways. Taiwan and Brunei also have claims in the busy waterway. Indonesia is not officially involved in the conflicts but has had confrontations with Chinese fishermen and coast guard vessels which it has accused of encroaching into the Natuna Sea near the disputed waters.
Lorenzana said the government has no plan to militarize the island by arming it with missiles, cannons or other heavy weapons.
Three nearby sand bars collectively called Sandy Cay have become a new front in the disputes after China accused the Philippines of attempting to construct structures there a few years ago. Since then, flotillas of Chinese fishing boats and coast guard and navy ships have kept a close watch on Sandy Cay, sparking protests from the Philippines. AP