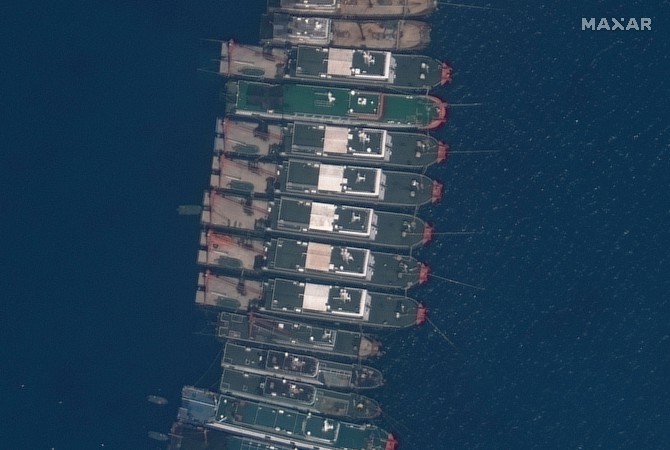 The Philippine government said yesterday that more than 250 Chinese vessels it believes are manned by militia have been spotted near six Manila-claimed islands and reefs in the disputed South China Sea and demanded that China immediately remove them.
The gathering of the Chinese-flagged vessels, along with four Chinese navy ships at a Chinese-occupied manmade island base, “is hazardous to navigation and safety of life at sea” and may damage coral reefs and threaten the Philippines’ sovereign rights, a government body overseeing the disputed waters said.
China has ignored a Philippine government diplomatic protest and a call more than a week ago by Philippine Defense Secretary Delfin Lorenzana for about 200 Chinese vessels to leave Whitsun Reef, stating that the maritime territory belongs to it and the Chinese vessels were sheltering from rough seas.
After carrying out aerial and maritime patrol missions, Philippine officials said 44 Chinese “maritime militia” vessels were still moored Monday at Whitsun Reef, which Manila calls Julian Felipe. More than 200 other vessels from the Chinese flotilla have apparently dispersed to five other areas in the Spratly group of islands, including three Chinese-occupied artificial islands, they said.
At least four Chinese navy ships were at Chinese-occupied Mischief Reef, the Philippine officials said. China took control of the reef in 1995, drawing strong protests from the Philippines and other claimant states.
About 45 Chinese vessels were in the vicinity of the Philippine-occupied island of Thitu, which Manila calls Pagasa, the officials said.
“The Philippines calls on China to immediately withdraw these vessels flying its flag,” the National Task Force for the West Philippine Sea said in a statement. “Neither the Philippines nor the international community will ever accept China’s assertion of its so-called `indisputable integrated sovereignty’ over almost all of the South China Sea.”
The interagency body led by President Rodrigo Duterte’s national security adviser released surveillance photos of the Chinese flotilla in the disputed areas, which the Philippine government says are in its internationally recognized exclusive economic zone, or EEZ, where it has exclusive rights to fish and harness potential undersea gas and oil deposits and other resources.
“Their swarming … poses a threat to the peaceful exercise of sovereign rights of the Philippines in its EEZ,” the task force said.
The Philippines regards the Spratlys, where it occupies nine islands and islets, as part of its western province of Palawan. But the resource-rich chain of islands, islets and atolls is also claimed by China, Vietnam, Malaysia, Taiwan and Brunei. China has turned seven disputed reefs into missile-protected island bases, ratcheting up tensions in recent years.
Duterte has nurtured friendly ties with Beijing since taking office in 2016 and has been criticized for not immediately demanding Chinese compliance with an international arbitration ruling that invalidated Beijing’s historic claims to virtually the entire South China Sea. China has refused to recognize the 2016 ruling, which it called “a sham,” and continues to defy it. JIM GOMEZ, MANILA, MDT/AP