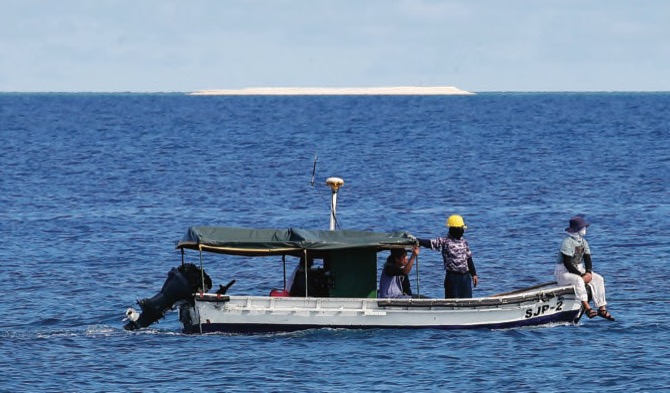 The Philippines has protested the presence of more than 200 Chinese vessels that were sighted from January to March near a Philippine-occupied island in the disputed South China Sea, officials said yesterday.

Presidential spokesman Salvador Panelo said the Department of Foreign Affairs lodged the protest after the military monitored about 275 Chinese vessels near Thitu island, which is called Pag-asa by Filipinos, in the Spratlys, the most hotly contested region in the busy waterway.

A regional military spokesman, Capt. Jason Ramon, said the number of spotted Chinese boats was 217, about the same number in the last quarter. It was not immediately clear why Ramon and Panelo gave different numbers.

The Chinese vessels have been sighted more than 600 times near Thitu so far this year, military officials said.

Asked if the Chinese flotilla’s presence was a cause for worry, Panelo said, “Anything that concerns the security of the Philippines will always be a concern.”

Panelo did not say when the Philippines protested, but a Filipino diplomat told The Associated Press that the foreign affairs department in Manila sent a diplomatic note to the Chinese Embassy on Friday to express concern over the “swarming of Chinese boats” near Thitu. The diplomat asked not to be named because of a lack of authority to discuss the issue publicly.

China and the Philippines, along with Vietnam, Malaysia, Taiwan and Brunei, have been disputing ownership of the strategic waters for decades.

Tensions flared in recent years, when China transformed seven disputed reefs into islands, three of which had military-grade runways, sparking protests and concerns from Western and Asian countries. The artificial islands were later reportedly installed with a missile defense system.

While China also claims ownership of Thitu, where Filipino forces and a fishing community can be found, it apparently started to deploy Chinese navy and coast guard ships and fishing boats in sizable numbers in the area in 2017 after Filipinos tried to erect shelters on one of three sandbars that naturally emerged in recent years between Thitu and a Chinese-occupied man- made island called Subi.

China protested the Philippine attempt to occupy the sandbar, prompting President Rodrigo Duterte to order a halt to the planned construction, Defense Secretary Delfin Lorenzana said at the time.

Since then, the Chinese vessels have never left the vicinity of the barren sandbars, collectively called Sandy Cay, near Thitu. The nearest sandbar in Sandy Cay is about 2.5 nautical miles from Thitu island.

Duterte has taken a nonconfrontational approach to the territorial disputes between China and his country as he sought Chinese trade, investment and infrastructure funding. He has refused to immediately take up with China a ruling by a U.N.-linked tribunal that invalidated Beijing’s sprawling claims in the South China Sea, sparking criticism from nationalists and left- wing groups, which wanted him to demand immediate Chinese compliance with the landmark decision.

Last month, two former Philippine officials filed a complaint with the International Criminal Court accusing Chinese President Xi Jinping of crimes against humanity over his government’s assertive actions in the South China Sea, which they say have deprived thousands of fishermen of their livelihood and destroyed the environment.

Duterte said he doubted the complaint would prosper and stressed his administration had no role in it.

Zhao dismissed the complaint as a baseless political attack that will go nowhere.

“We think it is a kind of political action viciously targeting the Chinese leadership,” Zhao told reporters. “It’s a fabrication and also a misuse of the mandate of the ICC.” Jim Gomez, Manila, AP