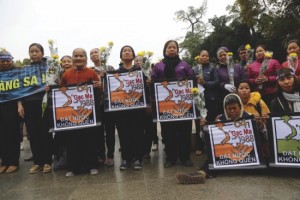 About 200 Vietnamese gathered in central Hanoi yesterday to remember 64 Vietnamese soldiers who were killed by the Chinese navy in a clash 28 years ago in the disputed South China Sea.
They lit incense and laid flowers at the statue of King Ly Thai To, a Vietnamese hero, and then marched around the landmark Hoan Kiem Lake, chanting “down with Communist China’s aggression” in the commemoration that lasted an hour.
There were no official commemorations by the government.
“I think the government should organize official ceremonies to remember those soldiers who were killed defending Truong Sa and Hoang Sa islands,” said 84-year-old retired civil servant Le Mai Dau, one of the participants.
Truong Sa and Hoang Sa are Vietnamese terms for the Spratly and Paracel islands.
Police watched the ceremony but did not intervene. Unauthorized gatherings are normally stopped by the authorities.
The 64 were killed in skirmishes with the Chinese at Johnson South Reef in the Spratly Islands and nine Vietnamese engineering soldiers were taken prisoner. In the last two years China has reclaimed land around the Johnson South Reef to form artificial islands.
China claims almost all of the Spratlys, which are rich in natural resources. Vietnam along with the Philippines, Malaysia, Brunei and Taiwan also claim parts or all of the islands. AP