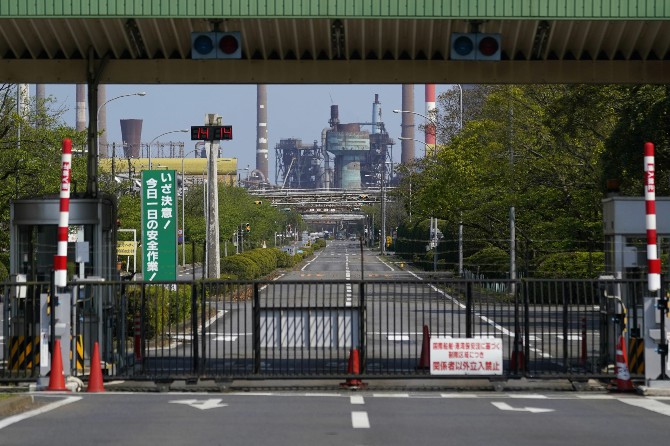 A South Korean court is set to start liquidating assets of a Japanese company to compensate Koreans conscripted to work during colonial occupation, straining ties between two key U.S. partners just as the Trump administration needs their help in countering China.
A district court in the eastern city of Pohang will start a process today to seize shares valued at about $356,000 that Japan’s Nippon Steel Corp. has in a joint venture with South Korean steelmaker Posco. No money is expected to move immediately, however, as the liquidation process requires months to realize due to procedural formalities. If Nippon Steel does not appeal the case within seven days, the order becomes effective and will likely inflame tensions as Japan has said the order is unlawful.
The two countries have seen threats to their enmeshed economies and their joint security efforts following South Korea’s Supreme Court ruling in 2018 that Nippon Steel and Mitsubishi Heavy Industries Ltd. were liable to compensate for forced labor during the 1910-1945 colonial period.
The renewed acrimony could prove troublesome for Donald Trump, as his administration has stepped up its pressure campaign against China, seeking help from allies to contain Beijing’s push into the South China Sea and block Chinese technology on the grounds of posing security risks.
Tokyo has vowed to strike back if the liquidation takes place, while Seoul has said it has already reviewed possible countermeasures in response.
Japan has said all claims were completely and finally settled by a 1965 treaty that established basic relations, while Seoul believes some conscripted workers were not properly compensated for their emotional pain and suffering.
The Trump administration has been reluctant to step in and ease tensions. But last year it pressured Seoul to make a last-minute pivot to save an intelligence sharing pact with Tokyo designed to demonstrate the neighbors’ ability to cooperate independently from Washington to counter shared threats including China and North Korea.
The renewed tensions could also hurt the U.S. on the economic front. The Trump administration has talked about bringing supply chains home from China, and even publicly floated the need for a group of friendly nations in Asia that could help produce essential goods, seeking help from the likes of Japan, South Korea and others.
The tension between Tokyo and Seoul, however, could benefit China, according to Zhao Tong, Senior Fellow at CarnegieTsinghua Center in Beijing.
“The growing gap between Japan and South Korea may help China maintain a good relationship with South Korea due to their shared historical grievances toward Japan and can help ensure that a U.S.-ROK-Japan trilateral security alliance will never become real,” Zhao said, referring to South Korea by its formal name.
People in both countries see ties clouded by animosity. A poll published in June by Japan’s Yomiuri newspaper and South Korea’s Chosun Ilbo found 84% of Japanese and a record high of more than 90% of South Koreans saw the relationship between the two countries as bad.
Japanese Prime Minister Shinzo Abe and South Korean President Moon Jae-in have found support at home for taking a hard line against their neighbor. With both facing slides in their domestic support rate, making unpopular concessions to ease the tensions could lead to an even deeper fall.
Apart from the court cases over colonial-era labor, Japan and South Korea are squaring off at the World Trade Organization over Tokyo’s decision to restrict exports of electronics components vital for South Korea’s tech sector.
Tokyo has also shown concern over a memorial at a private botanical garden in Pyeongchang, east of Seoul, showing a man thought to resemble Abe prostrating himself in apology before a seated young woman who represents Koreans trafficked in Japanese imperial army brothels. Jeong-Ho Lee, Bloomberg