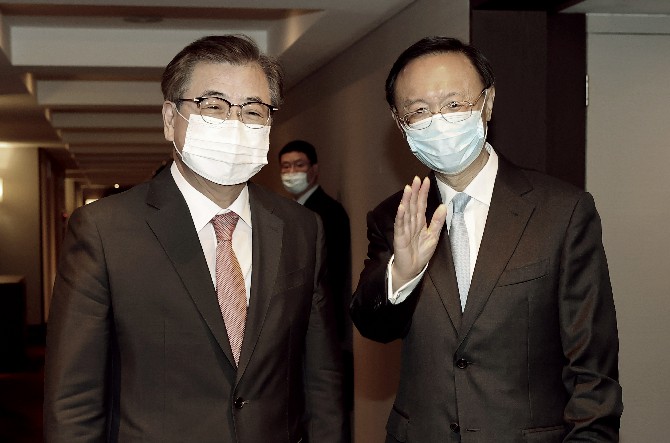 Senior South Korean and Chinese officials this weekend reaffirmed plans to arrange a summit between their leaders “at an early date” once coronavirus concerns subside, Seoul’s presidential office said.
At a meeting in the South Korean port city of Busan, top Chinese diplomat Yang Jiechi and South Korea’s national security adviser, Suh Hoon, also discussed the international standoff over North Korea’s nuclear weapons program and rising tensions between Washington and Beijing, the Blue House said in a statement.
The government of South Korean President Moon Jae-in has been eager to improve bilateral relations that have been strained since South Korea deployed a U.S. anti-missile system on its soil in 2017 over Chinese objections. Moon had hoped to host Chinese President Xi Jinping in Seoul during the earlier half of the year, but the spread of COVID-19 prevented the visit.
Yang, a Politburo member of the Chinese Communist Party’s powerful Central Committee, promised “constant communication and cooperation” with South Korea while supporting efforts to denuclearize the Korean Peninsula and stabilize peace, according to the Blue House, which didn’t provide further details.
Moon’s government is eager to resume engagement with North Korea, which has virtually cut off all inter-Korean cooperation amid nuclear negotiations with the Trump administration that have stalled over disagreements in exchanging sanctions relief for nuclear disarmament. China, North Korea’s major ally and economic lifeline, had endorsed the easing of U.S.-led sanctions and pressure to induce denuclearization steps from the North.
During the Busan meeting, Yang also briefed Suh on China’s position regarding its intensifying row with the Trump administration that has expanded from trade issues and now includes Hong Kong, Chinese Muslims, spying accusations and control of the South China Sea. Suh said “co-prosperity and friendly cooperation” between Washington and Beijing are critical for the interests of Northeast Asia and the world, the Blue House said.
Rising U.S.-Chinese tensions have rattled South Korea, which worries about being squeezed between its main military ally and biggest trading partner. AP