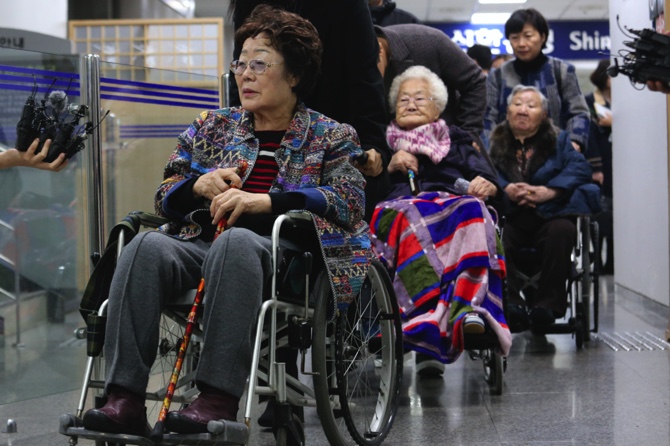 The trial at the Seoul Central District Court proceeded with empty seats in the defendant’s dock because Japan has refused to participate in the case, saying that its sovereign immunity shields it from lawsuits in other countries, according to court officials and the plaintiffs’ lawyers.

A group of 20 former sex slaves and relatives filed the suit in 2016 seeking compensation of 200 million won ($171,000) each, but the process was delayed after the Japanese government refused to receive copies of the complaint.

Japan insists that all compensation matters were settled by a 1965 treaty that normalized relations between the countries and has accused South Korea of repeatedly opening the book on issues that were supposed to be settled.

The case comes amid a deep row between Seoul and Tokyo over wartime history, triggered by a ruling by South Korea’s Supreme Court last year that called for Japanese companies to offer reparations to aging South Korean  plaintiffs for their World War II forced labor.

The dispute escalated into a trade war that saw both countries downgrade the other’s trade status, and then spilled over to military matters when Seoul threatened to end a 2016 military intelligence-sharing agreement with Tokyo.

“The Japanese government must repent,” Lee Ok-seon, a former sex slave, said at a news conference shortly before the trial began. “They kidnapped innocent kids and inflicted irreversible damages and they must repent. They must sincerely apologize.”

It’s not immediately clear how long the case will take. The court will rely solely on the plaintiffs’ legal arguments before making a verdict.

In an opinion submitted to the court on Tuesday, Amnesty International said a statute of limitations and Japan’s sovereign immunity should not be applicable to serious human rights violations and war crimes like military sexual slavery. The group also cited the South Korean Supreme Court ruling on forced laborers that said the 1965 treaty doesn’t block individual claims for reparations.

Under South Korea’s previous conservative government, the countries attempted to settle their decades-long row over sexual slavery in 2015 when the reached an agreement for Tokyo to fund 1 billion yen ($9 million) to a Seoul-based foundation to help support victims.

The deal was hugely unpopular in South Korea, where many people criticized their government for settling for far too less and accused Tokyo of attempting to silence the victims with money. The government of South Korean President Moon Jae-in, who took office in 2017, took steps to dissolve the foundation, saying that the deal lacked legitimacy because officials failed to properly communicate with victims before reaching it.

About 240 South Korean women came forward and registered with the government as victims of sexual slavery by Japan’s wartime military, but only 20 are still alive. Kim Tong-Hyung, AP