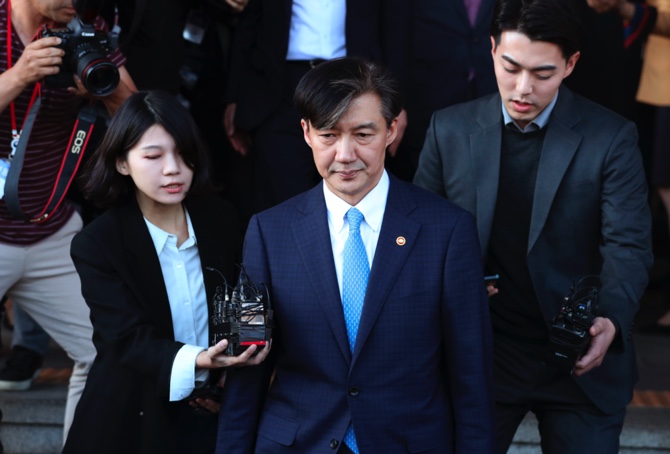 Cho Kuk’s questioning at the Seoul Central District Prosecutors’ Office came weeks after the arrests of his wife, brother and another relative over their suspected involvement in financial crimes and faking credentials to help get Cho’s daughter into medical school and obtain scholarships.

Cho, a reformist law professor and confidant of South Korean President Moon Jae-in, resigned as minister last month, citing the burden of the investigation into his family. He has denied legal wrongdoing while apologizing over the perks his daughter is alleged to have received.

Cho exercised his rights to remain silent during the interview that went on for eight hours, saying that it felt “pathetic and unnecessary” to answer prosecutors’ questions over allegations he had already denied, according to a statement he released through lawyers.

On Monday, Cho wrote on Facebook: “Everything about me will come under suspicion and I might get into trouble for things that I didn’t know about or don’t remember […] I feel miserable, but I will invest every effort to establish the truth and restore my honor.”

Huge crowds of Cho’s supporters and critics have marched in Seoul for weeks, demonstrating how the monthslong saga has deepened the country’s political divide.

Before Cho’s resignation, Moon stood firmly by the key political ally he appointed in September despite parliamentary resistance. But the controversy surrounding Cho caused the president’s popularity to slide.

Prosecutors last month arrested Cho’s university professor wife, Chung Kyung-shim, who has been indicted over her suspected involvement in dubious private equity investments and faking materials to help their daughter’s admission to a medical school in Busan. AP