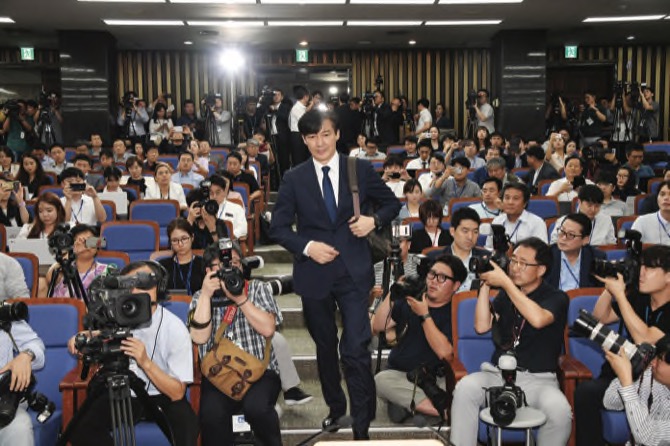 At a news conference that continued until the early hours of yesterday, Cho Kuk, a law professor and Moon’s former secretary for civil affairs, denied allegations that his daughter received special treatment in her admissions to a top university in Seoul and a medical school in Busan.

Cho, who for years built an image as a reform-minded anti-elitist, also denied wrongdoing over claims that his family attempted to evade taxes while transferring wealth to his children and made dubious investments in a private equity fund while he served in the presidential office.

Cho’s news conference at the National Assembly in Seoul was abruptly arranged after his parliamentary confirmation hearing set for Monday and yesterday fell through amid political bickering between ruling and opposition parties.

“Regardless of legal matters, I want to apologize to young students and people of South Korea,” Cho said while addressing the allegations surrounding his daughter, which struck a nerve in a country where teenagers toil in a hyper-competitive school environment because graduating from elite universities is seen as crucial in career prospects.

Cho touted himself as able to reform South Korea’s justice system, including curbing the powers of state prosecutors, who have exclusive authority to indict and seek warrants for criminal suspects and have broad control over police investigative activities.

His comments came as prosecutors continued to push an investigation into the allegations surrounding him and his family, raiding some 20 sites including universities and offices that Cho’s relatives used to manage their investments.

The controversy surrounding his close political ally has stained Moon’s reformist image and caused a slide in approval ratings in recent polls.

Moon, who is currently on a trip to Southeast Asia, asked the National Assembly to submit a hearing report on Cho by Friday, his office said yesterday, indicating he is leaning toward appointing Cho despite the controversy.