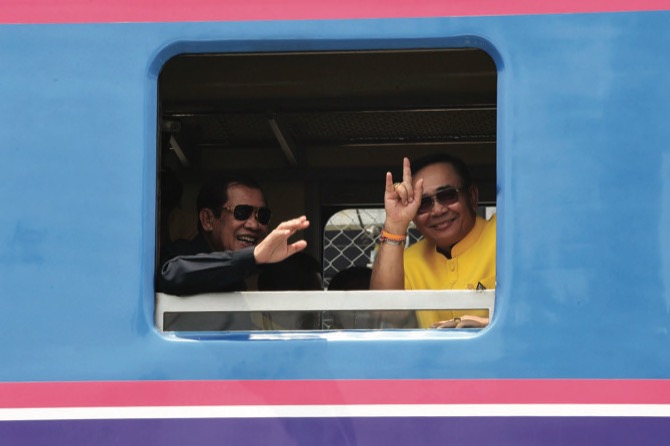 The leaders of Cambodia and Thailand met yesterday at the Thai border town of Aranyaprathet to mark the ceremonial reopening of a rail link that will restore train service between the two countries after more than four decades.

Cambodian Prime Minister Hun Sen and his Thai counterpart, Prayuth Chan-ocha, took a brief train ride across the border from Aranyaprathet to Cambodia’s Poipet to celebrate the occasion. Each also shoveled some cement to mark the completion of a nearby cross-border bridge for automotive traffic.

The two leaders signed an agreement on operating the cross-
border rail link.

Thailand helped fund Cambodia’s rail line and will also hand over a train with four carriages.

Service between the two countries was suspended in the early 1970s when the track was destroyed during Cambodia’s civil war. Only in the late 1990s was security completely restored with the defeat of the Cambodia’s communist Khmer Rouge guerrilla army.

Restoration work in Cambodia has already been completed from Poipet to the northwestern province of Sisophon, which has rail service to the capital, Phnom Penh.

There are plans to eventually offer service to Phnom Penh from the Thai capital, Bangkok, but there is not yet a schedule for reopening that route. The connection would be integrated into regional plans to link most of mainland Southeast Asian from Kunming in southern China through what has been called the Southern Economic Corridor.

Hun Sen said at yesterday’s ceremony that the new rail connection would help develop both countries’ economies, especially by connecting to the rest of the Southeast Asian region.

Malaysia’s government said it will resurrect a multibillion- dollar property and transportation project in Kuala Lumpur involving a Chinese state company, calling it a contribution to China’s global “Belt and Road” infrastructure initiative.

Prime Minister Mahathir Mohamad, who is traveling to China next week to attend the second Belt and Road forum, said last week the Cabinet agreed to reinstate the Bandar Malaysia project, which is expected to cost 140 billion ringgit (USD33.8 billion).

It comes a week after Malaysia resumed a China-backed rail link project after the Chinese contractor agreed to cut the construction cost by one third to 44 billion ringgit ($10.6 billion). Mahathir said that both projects will boost ties with China and add economic value.

He said that Bandar Malaysia, which is 40% owned by the government, will be developed with the same consortium partners, Malaysian developer Iskandar Waterfront Holdings and China Railway Engineering Corp. The 500-acre (202-hectare) project will boost urban development and serve as a hub to woo global finance, technology and entrepreneurial firms, he added.

Bandar Malaysia was started by the indebted 1MDB state investment fund in 2011 but it later sold a 60% stake to the consortium. The government took over 1MDB’s stake due to its debt problems, but the project was terminated by the previous government in May 2017 due to a payment dispute with the consortium.

The 1MDB scandal led to the election ouster last May of former Prime Minister Najib Razak, who is currently on trial for alleged corruption.

Chinese President Xi Jinping has made the Belt and Road initiative a signature policy. The estimated $1 trillion-plus plan aims to weave a network of ports, bridges and power plants linking China with Africa, Europe and beyond.

“These two major projects will also be a significant contribution to the Belt and Road Initiative, which Malaysia expects to be able to tap on and exploit its multiplier effects along the value chain,” Mahathir said.

Mahathir said the revived project will include 10,000 affordable homes and a people’s park and will prioritize the use of local construction material.

It was originally designed to house the main hub for a high-speed rail line connecting Singapore to Kuala Lumpur that would cut travel time to 90 minutes, but Mahathir’s government suspended the rail project on the ground that it was too costly.

Mahathir said there will be “sufficient room for the station” if the government later decides to go ahead with the high-speed rail line. MDT/AP