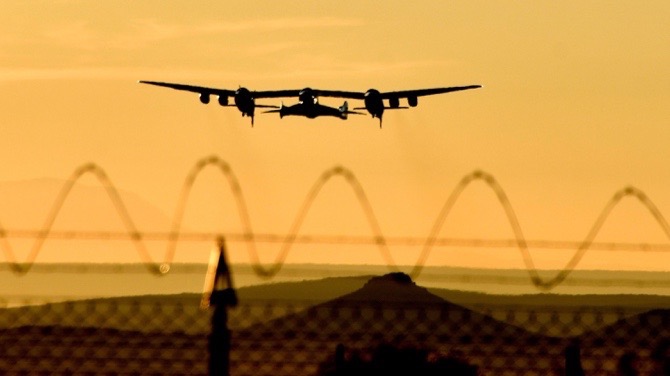 Richard Branson’s Virgin Galactic snagged headlines with its announcement of the world’s first publicly traded space- tourism operator. But it will need to focus on more worldly ventures to find the sales growth shareholders demand.

The company already has identified one market that’s far larger than just taking wealthy folks on joyrides to weightlessness: Using its hypersonic spacecraft to give earthly travelers back more of their time by drastically shortening some of the planet’s longest flights.

Virgin Galactic’s merger with Social Capital Hedosophia will “definitely” accelerate the company’s time frame for developing its aviation plans, George Whitesides, Virgin Galactic’s chief executive officer, said Tuesday. The business, which he says is probably less than a decade away from startup, would reduce the 10-hour trip from Los Angeles to Tokyo to more like an hour by flying above the atmosphere at more than five times the speed of sound.

“They bring a whole lot beyond just money to this partnership,” Whitesides said of Social Capital Hedosophia, a special-purpose company that raised USD600 million two years ago in a “blank check” IPO. He described the founders of SCH as “some of the world’s best business people.”

Elon Musk, who leads rival SpaceX, has also discussed point-to-point hypersonic travel as a potentially lucrative ancillary business for his space-tourism plans. Currently, more modest supersonic travel – faster than Mach 1, the speed of sound – is the goal of other aviation startups.

The business of space could grow to $805 billion by 2030 from $244 billion in 2010, according to UBS AG analysts, with tourist trips like those planned by Branson eventually valued at more than $3 billion. The use of sub-orbital flights to slash long-haul travel times could be worth much more, at $20 billion a year, assuming the technology captures about 5% of the market, they estimate.

Social Capital Hedosophia will have a 49% stake in the combined business, according to a statement Tuesday. The transaction will raise about $800 million for Virgin Galactic, with SCH’s founder, Chamath Palihapitiya, contributing $100 million and becoming chairman of the combined company.

The sale will help fund Virgin Galactic until its spaceships can operate and generate a profit, which Palihapitiya said is being targeted for August 2021. Commercial flights to space will start within a year from now while earthbound hypersonic trips are a five- to 10-year project, he said.

SCH was established by Palihapitiya, an early executive at Facebook Inc., and presented investors a unique proposition ahead of its September 2017 IPO: We’ll scour the world for two years to find a promising late-stage company to take public. Its choice became Virgin Galactic.

“When I got to see the business I was pretty floored, quite honestly, about what they’d built and the quality of the business that it would become,” Palihapitiya said of Virgin Galactic.

When he first created SCH, Palihapitiya said he was looking for a company that would benefit from his expertise in finding the right product fit in different markets. Now he can try applying that expertise to space travel.

Stock reaction to the merger plan was muted, with SCH, trading under the ticker IPOA, up 2.4% to $10.69 at the close in New York. The shares have hovered around $10 since they were listed, giving a market value of about $900 million.

While hundreds have signed up for initial flights costing $250,000 or more, the price will have to come down in order to attract the millions of people that Branson says would ultimately want to take trips to the edge of space. The sweet spot for mass consumer adoption would be $50,000, according to Bank of America Merrill Lynch.

There are plenty of risks. The fatal crash of a Virgin Galactic space plane in 2014 put flights on hold for four years and almost led Branson to can the venture. Another calamity may result in its termination.

Investing in Virgin Galactic would also represent a gamble on Branson beating formidable rivals in the shape of Amazon.com Inc. founder Jeff Bezos and Tesla Inc.’s Musk in the race to send customers into space.

Currently, Virgin Galactic holds $80 million in deposits from more than 600 customers ready to take a 90-minute journey to an altitude of more than 55 miles, allowing them to experience weightlessness and see the curvature of the Earth.

About 2,500 more have expressed an interest in becoming customers, who if they made bookings would take Virgin Galactic through about four years of flights, Palihapitiya said.

Branson, 68, founded Virgin Galactic in 2004. His spacecraft operate like planes rather than reusable rockets, conveying what he considers to be an advantage because they could also potentially access aviation markets.

“Virgin Galactic is very far ahead in terms of where their technology sits,” said Northern Sky Research analyst Dallas Kasaboski. “But the market is still embryonic and faces the risks of logistical roadblocks and unexpected costs.”

Branson plans to make his own first flight this year or next, depending on the pace of further flight testing in New Mexico, where Virgin Galactic is moving 100 staff from a California test center. The next flight should occur by year’s end, Whitesides said.