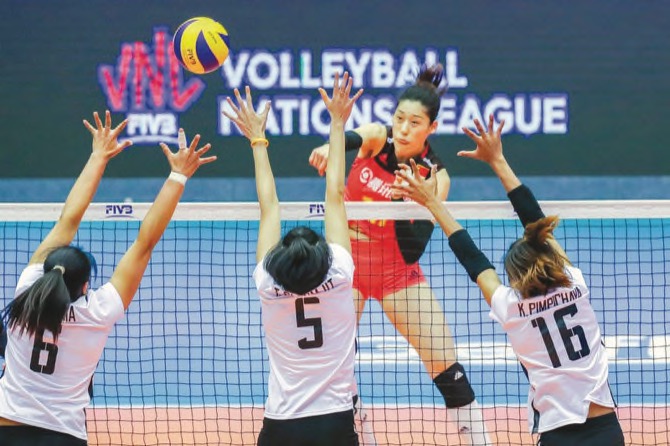 The FIVB Women’s Volleyball Nations League will return to the Macao Forum volleyball court next month.

A replacement of the former FIVB World Grand Prix, the event will be held in the same format as last year, with a total of 16 teams competing, comprised of 12 core teams and four challenger squads.
The teams will compete in 20 countries and regions during the six-week tournament. The event has two stages – a preliminary round during the first five weeks of the event, and a final round to decide the winner during the last week of the tournament, held from July 3 to 7 in Nanjing.
Like last year’s season, Macau is one of the hosts for the second week of the preliminary round.

The Macao Forum will once more be the stage for the local event which will run for three consecutive days, from May 28 to 30 (Tuesday to Thursday) with teams from China, Belgium, Korea and Thailand competing.
The local official sponsor of the event, Galaxy Entertainment Group, is also unchanged from previous tournaments.

This year, aside from the regular China “home” team (currently the world number two team), spectators will see current world number 19 team Belgium, and two of the most successful Asian nations in the sport, Korea and Thailand.
The competition format remains unchanged, with two matches each day of the three-day event.

Belgium will play Korea in the opening match on May 28. Korea will also play the final game of the local event when they face China on the evening of May 30.

Tickets will be on sale from 11 a.m. on April 16 at 15 designated Circle K convenience stores in Macau, as well as through the official website of the event (www.macaovnl.com).
Tickets cost MOP150 per day (two matches included). Spectators wishing to purchase bundled tickets for all the days of the event will receive a 30% discount.

Including the previous competition format, Macau has hosted 22 FIVB events in total since 1994.

In 2018, the first Nations League competition was won by  the U.S., with Turkey and China coming second and third respectively in the final round held in Nanjing.