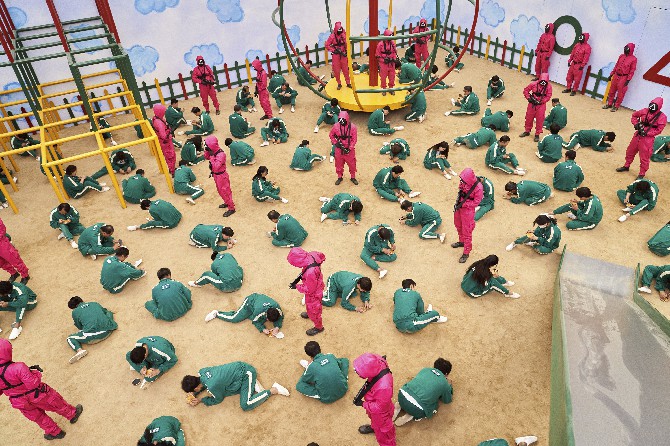 Adults should take time to “discuss with children and teenagers after they view [violent content] to ease their own anxieties,” Nadia Chan Hei Ka, a UK-registered clinical psychologist and Macau-registered psychotherapist, told the Times.
Not all types of discussion will be helpful, though — only an open and critical conversation will do the job, she said while addressing the psychological impact of fictional series like Squid Game.
The conversations are not only to guide young viewers in their future actions, but also to offer parents and guardians the chance to understand their children’s thoughts and feelings on what they have seen.
Sharing the same view is Paul Pun, executive director of Caritas Macau and retired school principal and social worker. He says “[educators] should prepare students with good perspectives on life, so when they come across negative elements, such as violent works of fiction, they insusceptible to them. They will put more weight on the good side.”
Moreover, the charity manager stressed that human beings are always learning, meaning that our knowledge expands through experiences. “When we get burnt by a fire, we will adjust and be more careful in the future,” Pun explained.
Regular preparation is also important to building up protection against violent content, says Pun.
“For example, everybody fears tripping while walking, but they can regularly exercise to avoid that,” he suggests. “Furthermore, we can’t be overly careful, so we also teach senior residents how to protect themselves when they trip.”
Chan suggests three other tactics to avoid becoming psychologically disturbed by any violent work of fiction: knowing our own limits and tolerance; setting boundaries; and being wary of binge watching.
Chan explains that the construction of ideas is complicated. It is not merely a single or double exposure to certain content — repetition is an important factor. Meanwhile, education and values are also important factors affecting the outcome.
“Behavior formation is complicated and multi-axial, which means very few, if any, factors are sufficient or necessary alone, but rather a combination of all these factors that will favor the occurrence of the targeted behavior,” the clinical psychologist said.
The Education and Youth Affairs Bureau (DSEDJ) recently issued a statement warning parents, guardians and educators about the potential impact on children and teenagers of Squid Game, a blockbuster Netflix series that has gained popularity around the globe.
In the statement, the DSEDJ describes the series as containing “violence, bloodshed, horror and distorted values.”
The bureau added that the violent and bloody scenes would have psychological impact on younger viewers. Worse, youngsters may seek to imitate the violence portrayed in the drama series.
“The distorted values will grow deep roots in their minds,” the authority warned.
The bureau reminds parents and guardians to provide assistance where necessary to younger generations when choosing which programs to watch. “Younger viewers should avoid watching shows that depict violence or pornography,” the DSEDJ added.
The Times contacted the online streaming platform for comment in response to the education regulator’s warning, fears about the series’ potential negative impacts, and its suggestions to viewers.
In reply, a Netflix spokesperson said by email: “Squid Game is rated 16+ and intended for mature audiences. We offer parents a wide variety of parental controls to make the appropriate choices for their families.”
Agnes Lam, associate professor of communications at the University of Macau, said that making such content available to viewers, regardless of their ages, deserves greater attention and caution.
“For example, when news about suicide is reported, it requires more careful attention. Communications studies don’t say that each person reading news about suicide will follow suit, but normally those already mentally affected will feel greater impact,” she said.
Lam added that even adult viewers could be affected by the Netflix series, depending on their mental strength.
She also emphasized that discussion is crucial in the process of viewing the series. “[The show] is actually very dark, with implications that when a person needs to get out of the mire of life, they have to kill their friends, families or neighbors,” she said. “If a person is already unhappy, watching the show will bring more sadness.”
Whether or not the drama series is a good production as a whole remains a hot topic, at least among the members of a Macau social media group who hold regular discussions – and sometimes debates – on arts and literature.
Group members do not find the series very appealing, despite its global popularity. However, the selection, arrangement and production of music in the series has received plaudits from the Australian violinists Brett Yang and Eddy Chen, who run the ‘TwoSetViolin’ YouTube channel with over 3.31 million subscribers. Their video discussing the musical score in the Netflix series has been viewed at least 345,000 times.
Both Yang and Chen agreed that the audio team picked a wonderful selection of music for the drama series.
The duo pointed out that the production team has used a work by Austrian composer Joseph Haydn in at least two scenes in the drama series, constructing a relaxing, if not vivid, atmosphere. Yet contrastingly, the show plays out as a relatively dark work.
From an artistic perspective, Lam finds the violence portrayed in the show meaningful and necessary to express the meaning of the fictional series.
Moreover, the use of children’s games and snacks can easily accord with adult viewers, connecting them with their childhood memories. This can make the show more appealing. These are also symbols that repeatedly arouse different senses, contributing to the show’s popularity.