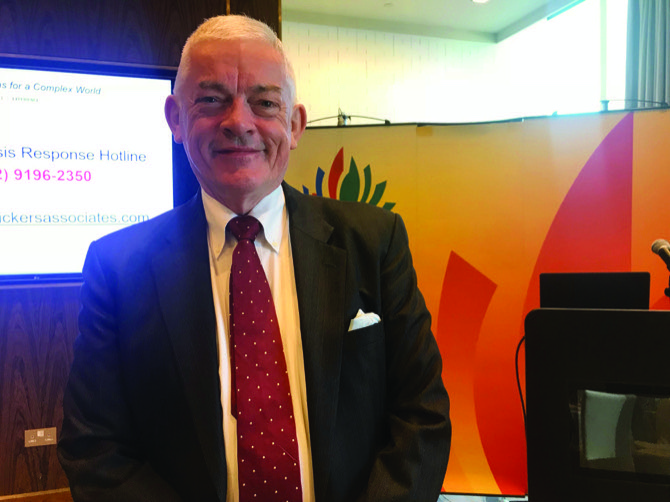 Macau is at risk of being dragged into the U.S.-China trade war because of the closeness of several American casino operators to U.S. President Donald Trump, according to a new report by specialist political and corporate risk consultancy, Steve Vickers and Associates.

The report, which comes just days after the latest batch of reciprocal tariffs were introduced Friday, warns that Las Vegas Sands, MGM Resorts International and Wynn Resorts now sit on a “geopolitical fault line” with even the possibility of a new concession at stake.

“The gaming sector in Macau is highly exposed,” notes the report. “Three of Macau’s six gaming concessionaires are US companies, Las Vegas Sands (‘LVS’), MGM, and Wynn Resorts; and LVS founder Sheldon Adelson boasts close ties to US President Trump. These companies now sit on a geopolitical fault line. Their Macau concessions can therefore be on the line.”

Speaking to the Times yesterday, company CEO Steve Vickers said that Macau was a “key fault line” in U.S.-China relations and “a political fault line more than an economic one.”

“[In Macau] we have huge [gaming] concessions to people close to the U.S. President,” he said. “Let’s look at the economic reality; LVS [Las Vegas Sands] was one of the biggest contributors to the Trump campaign.”

Vickers suggested that if China wanted to punish Trump, the U.S. gaming concessions in Macau could make attractive targets.

China implemented protectionist policies against strategic U.S. goods in the previous round of tariffs in April, with a view to weakening political support for Trump at home. These included measures against U.S.-produced cars, soybeans and tobacco – sectors heavily concentrated in marginal states that flipped from supporting the democrats in 2012 to Trump in 2016.

“I’m not saying that it’s going to happen, just that it’s a possibility,” said Vickers.

The report also noted that the current weakness of the yuan – and the possibility of it falling further – could be cause for Beijing to introduce more restrictions to capital outflows. Such restrictions might have a “dampening” effect on casino revenues in Macau.

Last week the yuan reached its lowest point against the U.S. dollar since November 2017. The Chinese currency has fallen more than 7 percent against the greenback since early April.

A weaker yuan is somewhat beneficial to the mainland as it makes the country’s exports more competitive and will help to mitigate the impact of Trump’s tariffs. However, the Chinese central bank is likely to intervene if it feels that the price of the yuan will encourage unwanted capital outflows.

Such a scenario might play into the hands of Macau’s recovering junket business, which specializes in financing high stakes gamblers from the mainland without the ability to bring large sums of money into the SAR.

“To a certain extent [it could help the junkets],” said Vickers, before adding that the impact will be limited given that there are “fewer junket operators in Macau today and they are more closely monitored by the authorities.”