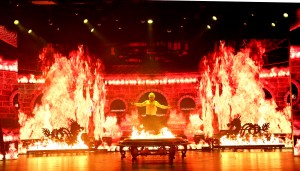 Celebrated illusionist Franz Harary has brought an award-winning line-up of magicians to Studio City’s new entertainment attraction, “The House of Magic,” which opened to the public yesterday.
Packed with hundreds of attendees from the media, magic industry and other sectors who gathered to witness the opening, the tripartite theater, the new show’s home,  is perched right next to the magic-themed restaurant, Shanghai Magic, which serves up modern Shanghai. The restaurant was also unveiled on the same day.
“The House of Magic is a destination that is designed by magicians, for magicians. With the opening of the House of Magic today, I am delighted that, together with Studio City, we are setting a new bar for Asia’s entertainment 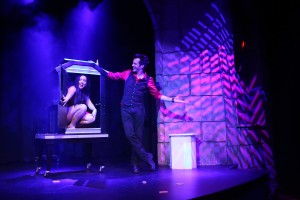 industry,” said the 53-year-old American magician, who is also the mastermind behind the theater.
After 30 years of being on the go around the globe for his large-scale spectacles, Harary wished to transform the elaborately designed venue into a platform for other wizards to shine.
“For the decades that I have performed magic around the globe, I have dreamt of creating a venue in which magicians of all types can visit and perform their talents and tricks on a huge scale, but which also brings magicians close enough so that fans are virtually immersed in the magic of the show itself,” Harary said. 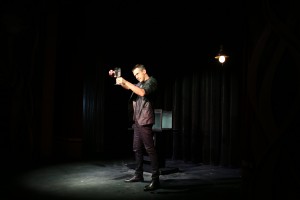 The technologically sophisticated theater show offers a 90-minute repertoire divided into three sessions, which each take place in three individual sub-theaters: the Majestic Theater, Lair Theater and Mega Magic Theater. The first two shows are both 15 minutes long, with the last one featuring Harary’s “Mega Magic.”
The spectacle will also introduce other equally well-known magicians who will perform their signature tricks in Macau.
Las Vegas-based illusionists Kyle Knight and Mistie, and famous Portuguese magician Luís de Matos showcased their acts to the guests yesterday before Harary staged one of his most revered illusions – four ladies carved into two in a gargantuan spinning roulette wheel – among other ruses.
More than simply a show, the entire performance is said to be a journey throughout which attendees experience close-up and interactive magic devised by performers themselves. Moreover, the high-tech monitor embedded in the major chamber allows visual and audio sensations throughout Harary’s illusion.