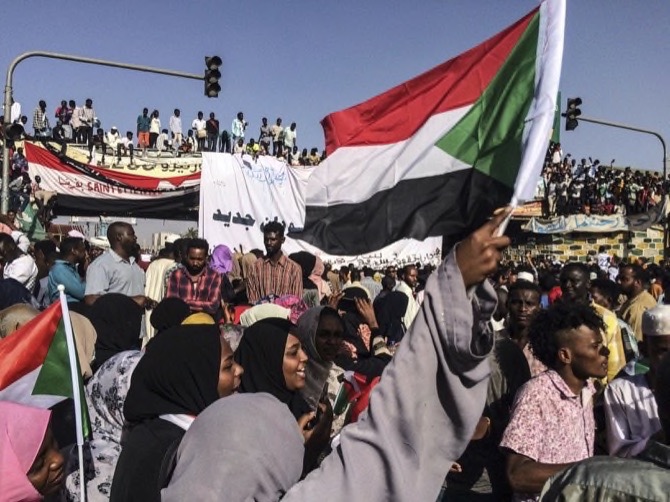 The Sudanese military attempted to break up an anti-government sit-in yesterday outside its headquarters in the capital, Khartoum, but backed off, organizers behind the protests said.

There were no clashes and no one was hurt but the incident set off concerns that the military, which last week ousted Sudan’s longtime President Omar al-Bashir after four months of street protests against his rule, could renege on its promises not to use force against the peaceful demonstrators.

Videos circulated online showing hundreds of troops outside the military compound in Khartoum. In the footage, an officer is heard saying they came to open roads, “clean the area” and remove the barricades set up by the protesters to protect their gathering.

Some protesters are then seen in the footage sitting down on the ground in front of the soldiers who subsequently back off. “Revolution,” protesters also chant in some of the videos, as well as slogans against al-Bashir’s Islamist supporters.

The Sudanese Professionals Association, which is behind the protests, urged people to head to the sit-in yesterday and defend it from any new attempts by the military to disperse the demonstrators.

“There is an attempt to break up the sit-in,” the group said. “We appeal everyone to head to the area to protect your revolution and gains.”

Previous attempts to break up the sit-in before al-Bashir’s ouster last Thursday had killed dozens of people.

Also, Gen. Abdel-Fattah Burhan, the head of the transitional military council, announced an overhaul the military leadership and appointed a new chief of staff, according to a statement from the military.

Little is known internationally about Babakr.

Since his ouster, al-Bashir — a president of nearly 30 years — has been under house arrest in Khartoum. After his ouster, which the military said was in response to the demands of the people, the army appointed a military council to rule for two years or less while elections are organized.

Protesters, who are in talks with the military council, fear that the army, dominated by al-Bashir appointees, will cling to power or select one of its own to succeed him. Protest organizers have urged the military to “immediately and unconditionally” hand power to a transitional civilian government that would rule for four years.

The political parties and movements behind the four months of protests said in a joint statement late Saturday that they would remain in the streets until their demands are met. They said a handover to civilian rule would be the “first step toward the fall of the regime.”

The military on Sunday urged opposition parties and movements to name a civilian prime minister and Cabinet but not a president to help govern the country.

The U.S., Britain and Norway urged the military authorities in a statement late Sunday to “listen to the calls from the Sudanese people.”

“Most pressingly, the continuing peaceful protests must not be met with violence from any quarter,” the statement said. Samy Magdy, Cairo, AP