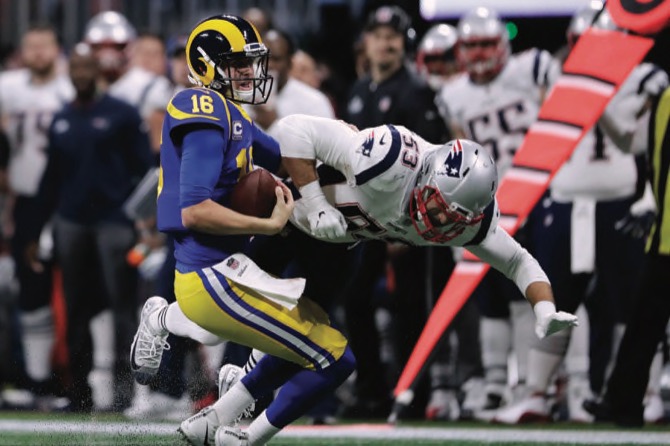 Their victory over the Los Angeles Rams put a stamp on a season that started 1-2, but ended with New England becoming the first team since the undefeated 1972 Miami Dolphins to win the Super Bowl after losing it the previous season.

New England is now tied with Pittsburgh at six Super Bowl titles apiece. The Patriots also improved to 41-1 in the Bill Belichick-Tom Brady era after shutting out an opponent in the first half, including the postseason. Brady is also the oldest quarterback to win a Super Bowl at age 41. Belichick is the oldest coach to hoist the Lombardi Trophy at age 66.

With his sixth ring, Brady has broken a tie with Hall of Famer Charles Haley for the most all-time by a player.

Brady engineered the game’s lone touchdown drive —a five- play, 69-yard march punctuated by an over-the-shoulder, 29-yard throw into the hands of tight end Rob Gronkowski. On the next play, Sony Michel scored on a 2-yard plunge with 7 minutes to play for a 10-3 lead.

But the real stars of this game were the New England defenders, who smothered Rams quarterback Jared Goff, holding him to 229 yards that felt like less.

The Rams, who averaged 32.9 points a game this season, joined the Miami Dolphins —from Super Bowl 6 in 1972— as the only the second team not to muster a touchdown in the title game.

The 13 points scored by New England matched the lowest total the team has scored in any of Brady’s 40 postseason starts. This was the first of Brady’s nine Super Bowl appearances in which he did not throw a touchdown.

It was his fifth postseason game without a TD pass. The Patriots are now 5-0 in those games. MDT/AP