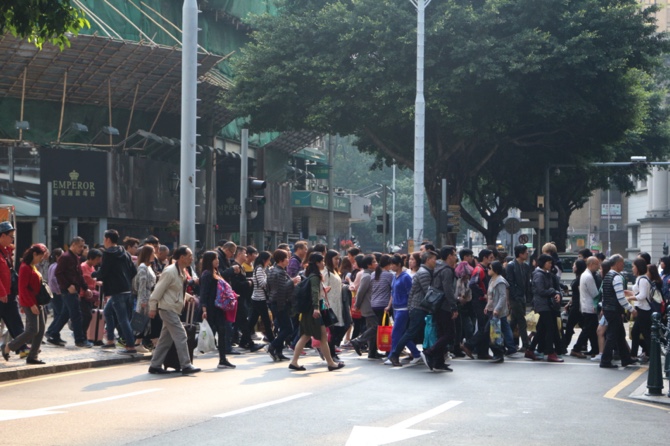 Seventy-eight percent of local residents say they trust the central government in Beijing, a survey released by the Macau University of Science and Technology has shown.

Yesterday, the school’s Macau Media Research Center released a report on Macau residents’ new media habits. For the first time, the center measured local residents’ levels of trust towards and views on both the central government and the Macau local government.

Local residents put less faith in the Macau government than the central government in Beijing, according to the survey, with about 72% of respondents saying they trusted the local authorities.

The rest of the respondents either distrusted the two governments or did not express a clear opinion.

Age and an interest in following new media were both positively correlated with the level of trust resident respondents had in the governments. Meanwhile, income had a negative correlation, meaning that the more money a respondent made, the less confidence they had in the local and central governments.

More than 80% of respondents follow at least one social media account belonging to a traditional media organization. About half followed official government accounts on social media, while 61% followed those of at least one private enterprise.

The survey also found that Macau residents who followed an official WeChat account were more likely to trust the government. Forty-four percent of respondents followed bloggers on WeChat.

However, Key Opinion Leaders (KOLs), a term to describe people who are very influential on the internet and social media, tended to drag down Macau residents’ confidence in both the central government and the local government. Those who followed KOLs tended to have less confidence in the government.

The survey showed that only 22% of respondents followed KOLs, suggesting that “Macau residents pay less attention to KOLs,” according to Guo Yu, an associate professor at the Macau University of Science and Technology’s Faculty of Humanities and Arts.

Guo remarked that “this is a really good sign for the Macau government if it wishes to lead public opinion.”

The more frequently Macau residents engaged with traditional media, the more trust they had in the central government, the survey found. It did not specify whether non-Chinese-language media was included in the survey.

A higher level of trust in the governments was also recorded among respondents who engaged with entertainment and leisure media.

Most of the respondents also said that they were confident about the development of the ‘one country, two systems’ policy framework in Macau and about the city’s own economic development.

In August 2019, the Public Security Police Force refused to allow a demonstration to be held opposing the perceived brutality of the actions of Hong Kong police authorities last year. Forty-
four percent of the respondents “highly supported” this decision. Guo concluded that Macau residents “very much cherish local security and stability.”

Less popular were respondents’ views on Macau’s participation in the Greater Bay Area initiative. Whereas 42% of respondents agreed that the central government’s Greater Bay Area policies were beneficial to Macau, only 38% support the city’s integration into the region.