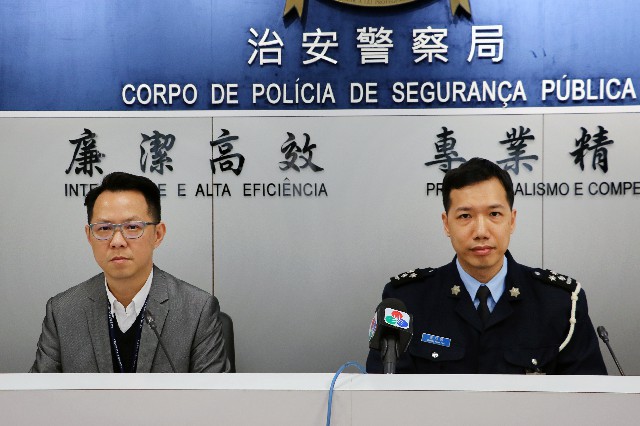 A rape at a Cotai hotel involving a female and a male, both from the mainland, has been reported to the Judiciary Police (PJ) following referral by the Public Security Police Force, the former said in a press conference yesterday.
A 51-year-old alleged male rapist, surnamed Sun and reported to be the owner of a karaoke club, met the victim at the casino associated with the Cotai hotel on October 17, according to the female in her thirties.
The man confessed to having sexual intercourse with the woman, but denied the accusation of rape.
The woman told the police that at the time, she was gambling at the casino on her own. The man approached her about 7 p.m. and started to gamble with her. At about 9:30 p.m., the suspect invited her to his room for a brief rest, to which she agreed.
Right after entering the room, the suspect pushed her onto the bed and raped her without using a condom. She told the police that the rape ended at about 10 p.m. and they left the room together.
Back on the casino floor, thinking she was safe, the victim called the police to report the rape. The casino security was somehow notified and the duo was brought to a room in the casino, where they were looked after by security guards.
Medical checks found bruises on the victim’s right thumb. Such an injury might have been caused by a blunt object. Besides this, no other injury was found on the victim.
The case has been passed to the Public Prosecutions Office for judicial action.

Alert for online betting scams
A local man has reported to the Judiciary Police that in early October, he came across an advertisement for an online casino in a mobile app. He visited the website and was right away contacted by the betting site’s “customer service team.”
He was told that if he registered for an account and deposited money immediately, he would get extra money for betting.
The man agreed and between October 6 and 13, he deposited funds on 10 separate occasions, with the money deposited to the betting site’s account totaling to RMB148,300. He played some games and successfully withdrew RMB71,440.
On October 13, he wanted to cash all his funds but was told to deposit RMB200,000 by October 19 in order to withdraw his funds. Failure to do so would result in a monetary fine.
As he refused to do so, he lost contact with the website’s “customer service team.” Therefore, he reported the case to the police, citing his loss as RMB76,860. Further investigation is being conducted by the Judiciary Police.

Burglary at Coloane
building site
Construction site workers should also stay alert for possible theft. At noon on October 18, the Judiciary Police received a referral by the Public Security Police about an aggravated burglary that took place at a Coloane construction site located at a large-scale residential estate.
The victim is a laborer from mainland who works at the site. There was an area at the site for storage of workers’ belongings. They could put their belongings in wooden boxes locked with small password locks.
That morning, the victim did so when he got in for work. At about 11:30 a.m., as his break time started, he reached for his belongings. Opening the box, he found his backpack open and all his belongings gone. He reported losses of HKD19,000, MOP3,550 and a cellphone, which altogether are worth MOP27,920.

The case of forgotten chips
The Public Security Police Force has also reminded the public to report any lost property to the police. The warning followed the disclosure of a case which occurred at about 7 p.m. on October 17, when a male mainland tourist reported to the police that he had lost casino chips worth HKD7,300 at a Cotai hotel.
At about 3 p.m. on the same day, the tourist was checking in to the hotel, in the course of which, he sat on a couch in the lobby to take some rest. He put his chips on a coffee table next to the couch.
He then got to his room and stayed there for about half an hour, before it suddenly crossed his mind that he had forgotten his chips at the lobby.
The chips were nowhere to be found. He thus notified the police.
After speaking with the hotel’s security team, the man and the police were told that no one was spotted taking the chips. Meanwhile, the hotel agreed to provide surveillance camera footage to the police at a later time.
The police secured a target the next day, who was believed to be the suspect from the camera footage.
Police later ascertained that the suspect is surnamed Wang, aged about 30 years and a holder of a Chinese passport. The suspect managed to leave Macau before the police got hold of him.
Two days later, on the evening of October 20, the suspect tried to re-enter Macau through the Border Gate with his girlfriend. They were arrested by the police at the border checkpoint.
At the police station, the man confessed that he found and took the casino chips from the hotel lobby. He then cashed them out and offered the money to his girlfriend for shopping.
He emphasized to the police that his girlfriend played no role in the case. She was told that the cash had been won by gambling at the casino. Police found that both statements matched.

Air passengers asked to remain vigilant
Flying passengers should remain vigilant for loss of property during flights, Macau police authorities said during yesterday’s press conference. A tourist flying in from Nanjing was reported to have lost HKD14,000 during his flight.
He failed to recover the money because he only discovered the loss after he entered Macau and reached the hotel where he was going to stay. He was only alerted of the loss when he looked for money to settle his taxi bill.