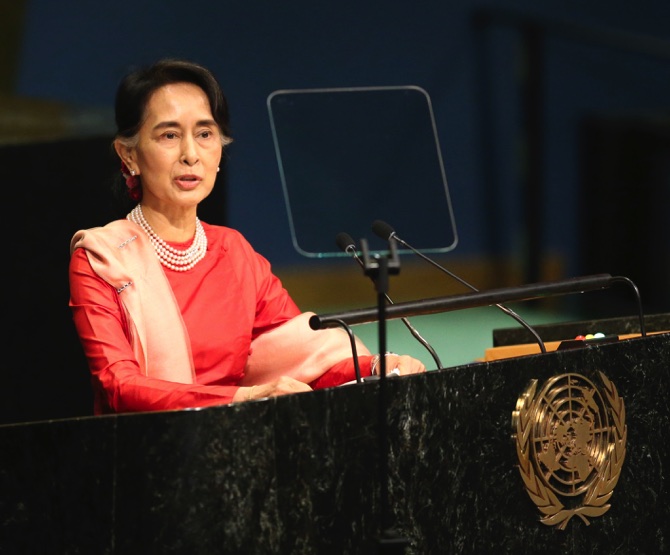 Former political prisoner Aung San Suu Kyi made her first speech Wednesday at the U.N. General Assembly since forming a democratically elected government and called for international understanding as Myanmar grapples with sectarian tensions.
Suu Kyi’s appearance at the annual gathering of world leaders at the United Nations is the latest landmark in a personal and national transformation as the country also known as Burma emerges from five decades of military rule.
But she also had to address concerns about the situation in troubled Rakhine state, where longstanding discrimination by majority Buddhists against Muslim Rohingya exploded into bloody violence in 2012. More than 100,000 people, mostly Rohingyas, are still in displacement camps.
Suu Kyi said the new government was “standing firm against the forces of prejudice and intolerance.” She said that and as a responsible nation, “we do not fear international scrutiny. We are committed to a sustainable solution that will lead to peace, stability and development for all communities within the state.”
But Suu Kyi, who has been criticized by some human rights activists for not speaking out forcefully in support of the Rohingya, did not mention the group by name in her speech. It’s a contentious issue among Buddhists in Rakhine, who consider the Rohingya to be illegal immigrants from neighboring Bangladesh and customarily call them “Bengali.”
Suu Kyi, 71, is the daughter of Myanmar’s founding father. She spent some 15 years in detention, mostly house arrest, when she led the pro-democratic opposition. Political reforms began five years ago, culminating in an election last November, won by her party. Although a junta-era constitution still bars her from the presidency and the military remains politically powerful, she has the title of state counsellor and effectively heads the government.
The Nobel peace laureate said that through the election, the people of Myanmar exercised their right to fashion their dreams and aspirations for their country. She said national reconciliation in Myanmar — an ethnically diverse country riven by long-running civil conflict — is her government’s highest priority.
Speaking later at the Asia Society, she said that Myanmar was only at the “beginning of the road” on its transition to democracy and to realize that goal required constitutional reform so the military does not retain a quota of a quarter of parliamentary seats.
She defended the recent appointment of a commission led by former U.N. chief Kofi Annan as the government seeks to relieve communal tension and strife in Rakhine state.
She said some political parties started protesting that “we were dragging a domestic issue onto the international stage but we explained that it had been on the international stage for some time and we had not been able to do anything about it.”
Suu Kyi said nine-member commission will address humanitarian, development, basic rights and security issues. AP