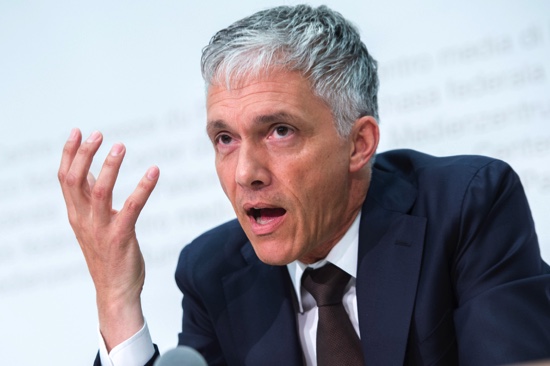 Banks in Switzerland have reported 53 possible acts of money-laundering in the investigation of FIFA’s 2018 and 2022 World Cup bidding contests, the country’s attorney-general said yesterday.
Michael Lauber said the “suspicious bank relations” were filed to comply with Switzerland’s regulations against money laundering.
The federal prosecutor described a “huge and complex” case which targets “criminal mismanagement and money-­laundering” in the bidding contests which sent the 2018 World Cup to Russia and the 2022 tournament to Qatar.
Lauber is prepared for either country to be stripped of the hosting rights if new evidence proves wrongdoing.
“I don’t mind if this has some collateral (damage) somewhere else,” he said, addressing the media for the first time since the Swiss investigation into FIFA was announced three weeks ago.
Lauber said he “does not exclude” interviewing FIFA President Sepp Blatter and secretary-general Jerome Valcke in the future, though they are not currently under suspicion.
Blatter is also a target of a separate investigation of bribery and racketeering led by U.S. federal agencies, who are working with Swiss authorities.
The American case alleged that senior FIFA voters received USD10 million in bribes to support South Africa’s successful bid for the 2010 World Cup. Valcke has been linked to transferring the money from a FIFA account on behalf of South African officials. Lauber would not be drawn on whether the South African case was also within the scope of his investigation.
FIFA began the 2018 and 2022 case by filing a criminal complaint against “persons unknown” last November. “This is a dynamic process,” Lauber said. “It could really go everywhere and that is why I don’t want to tell you which direction I put my focus.”
Football’s world governing body sent Lauber a 430-page investigation report submitted last September by FIFA’s former ethics prosecutor, Michael Garcia.
The former U.S. Attorney from the Southern District of New York led a team which spent two years investigating the World Cup bidding contests, which included nine candidates from 11 countries.
However, Garcia could not compel some FIFA voters to meet with him and did not have subpoena powers to gather key evidence. Russian officials failed to provide much evidence, and claimed computers used by bid staffers were leased and later destroyed.
“I have coercive measures and I am independent,” Lauber said at a news conference called after his re-election by federal authorities for a four-­year mandate.
Lauber’s team sought to speak in Zurich last month with 10 current and former FIFA executive committee members who took part in the December 2010 hosting votes.
FIFA was thrown into crisis on May 27 with dual raids in Zurich on a luxury downtown hotel and its own headquarters two days before its presidential election.
Two FIFA vice presidents, Jeffrey Webb of the Cayman Islands and Eugenio Figueredo of Uruguay, were among seven football officials arrested by Swiss police acting on an American request. They face extradition to the U.S.
On the same day, data and documents were seized at FIFA’s offices for the Swiss case. More evidence was collected from FIFA last week.
Lauber said Wednesday that his task force is analyzing nine terabytes of data.
The Swiss case started much later than the American investigation, which began in 2011. Four men, including former FIFA executive committee member Chuck Blazer, entered guilty pleas which were unsealed last month and 14 have been indicted.
Lauber’s office described FIFA as the damaged and injured party, though the case could yet implicate the football body’s senior officials and elected executive committee members.
Some FIFA officials did not cooperate with Garcia, while others who left after the 2010 vote when implicated in corruption refused to be interviewed.
Garcia resigned from FIFA last December in protest at Blatter’s leadership and claiming that his report was misrepresented by FIFA ethics judge Joachim Eckert.
Eckert’s report said most candidates, including Russia and Qatar, broke FIFA’s bidding rules but the wrongdoing did not influence the voting outcome. Russia won a four-candidate contest in a second round of voting. Qatar beat the U.S. 14-8 in the final round of a five-candidate contest.
The Blatter-led executive committee used Eckert’s summary and subsequent independent legal advice — sought by FIFA audit and compliance panel chairman Domenico Scala — to confirm Russia and Qatar as World Cup hosts last December.
However, Scala has said the hosting votes can be reopened if new evidence of misconduct emerges, even if the tournament in Russia is less than three years away.
“I don’t care about the timetable of FIFA,” Lauber said. “I care very much about my own timetable which I can’t disclose.” Graham Dunbar, Bern, AP