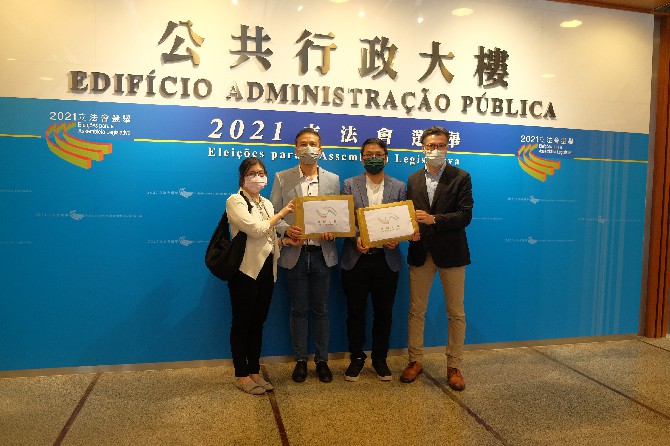 The Association of Synergy of Macau, a group led by Ron Lam which aims to court professional voters, yesterday submitted its nomination committee for the upcoming Legislative Assembly Election.
The group will run under the name “Synergy of Power”.
Lam used to be a member of the pro-establishment Macao Federation of Trade Unions and Deputy Director-General of its subsidiary, Choi In Tong Sam Association. He has also worked as assistant to former lawmaker Kwan Tsui Hang.
The group submitted 500 nominations.
Lam introduced the group as consisting of members from various professions, and said that its biggest advantage is its extended and established experience in political participation. He believes that the group will win greater support in this election.
In the last election, which was held in 2017, the namesake list consisted of five candidates, with Lam at the first place, followed by commentator Johnson Ian, Vitor da Rocha Vai, Tam Weng Chi and Che I Kei. They received 7,162 votes, but did not manage to claim a seat in the parliament.
Lam doubts that the institutions of the city have kept pace with swift economic development. He claims that there are outmoded systems and procedures, preventing residents from enjoying their fair share of the fruits of development.
Furthermore, he pointed out that some government policies, from both Legislative and Executive branches, have been mere slogans, lacking objective data and indices upon which residents can base their analysis and discussion.
Therefore, Lam believes that the government should, after consulting the general public, deliberate and form policies that not only reflect public opinion, but also resolve specific problems in the community.
Lam stressed that even without a seat in the assembly, the group has been listening to public opinion for the past four years. AL