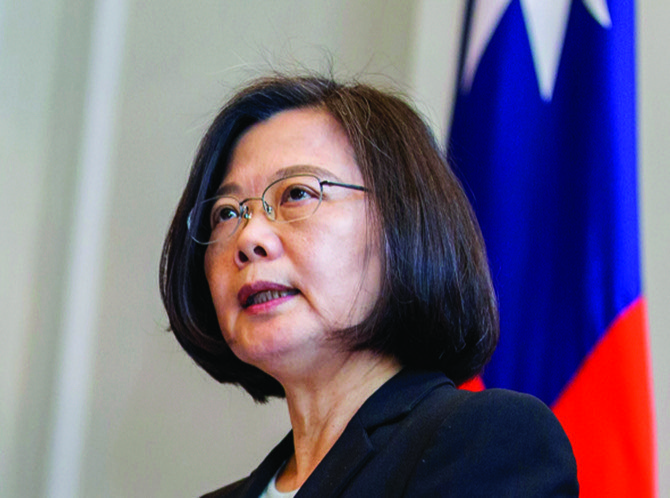 Chinese attempts at military coercion only strengthen Taiwan’s resolve to defend itself, the president of the self-governing island republic said yesterday.

Tsai Ing-wen’s comments followed what Taiwan’s defense ministry called a major foray by Chinese military planes into airspace just south of the island on Monday, as well as by warships in the surrounding waters.

Tsai told a security forum in Taipei that China’s actions “threaten Taiwan and other like-minded countries in the region.”

“As president, I want to tell you that Taiwan is not intimidated. These actions only serve to strengthen our resolve. Our military forces have the capacity, determination and commitment to defend Taiwan and not allow coercion to dictate our own future,” Tsai said.

China’s ruling Communist Party considers Taiwan its own territory, although it has never governed the island, which split from the mainland amid civil war in 1949.

Beijing cut ties with Tsai’s government following her 2016 election and has been stepping up military threats and efforts to isolate Taipei diplomatically.

Tsai, whom Beijing despises for her pro-independence views, has pushed for major improvements in Taiwan’s armed forces and this year has asked to purchase new F-16V fighter jets and M1 Abrams tanks from the U.S., its main supplier of weaponry.

Tsai also said Taiwan had received notification of U.S. approval of a training package for Taiwanese air force pilots at Luke Air Force Base in Arizona.

American arms sales to Taiwan have long been a thorn in the side of U.S. relations with China, adding to tensions over trade and human rights.

Taiwan said last week that its planes warned off Chinese military aircraft that crossed the center line in the Taiwan Strait, and called China’s move a provocation seeking to alter the status quo in the waterway dividing the island from mainland China. AP