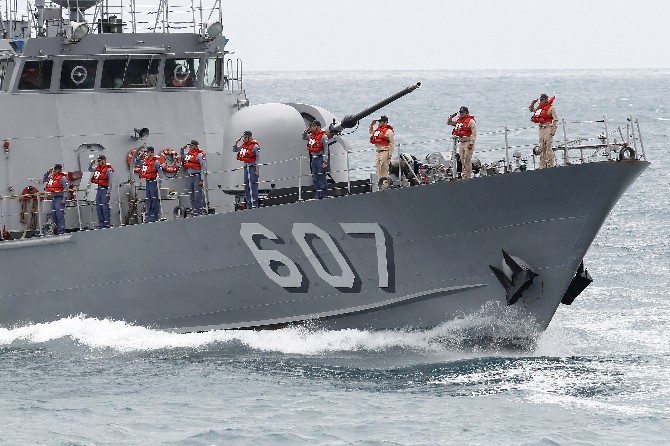 Taiwan said yesterday that recently proposed purchases of U.S. missiles and other arms systems will boost the island’s ability to credibly defend itself amid rising threats from China.
The comments from defense ministry spokesperson Shih Shun-wen came a day after China said it would exact unspecified retaliation against companies that make the weapons systems, including Lockheed Martin Corp., Raytheon Technologies Corp. and Boeing Co.’s defense division, the lead contractor on a $2.37 billion sale of Harpoon missile systems to Taiwan.
Facing a potential Chinese foe with overwhelming superiority in missiles, soldiers, ships and planes, Taiwan has struggled to assure its own people and its key ally, the U.S., that it is capable of and willing to see to its own defense. The sides split during a civil war in 1949 and China considers Taiwan its own territory, to be brought under its control by force if necessary.
“The purchase of these weapons will enhance Taiwan’s credible combat capabilities and asymmetric combat capabilities,” Shih told reporters at a briefing, using a term for countering a much stronger foe with precision weapons and advanced tactics. “This will also enhance our overall combat capabilities to contribute to maintaining peace and stability across the Taiwan Strait.”
In Beijing, foreign ministry spokesperson Wang Wenbin yesterday again accused the U.S. of violating its commitments to China while bolstering the confidence of those such as the ruling Democratic Progressive Party of President Tsai Ing-wen who favor the island’s independence from China.
Washington should “revoke the arms sale plan to Taiwan so as to avoid further damage to China-U.S. relations and peace and stability across the Taiwan Strait,” Wang told reporters. “China will take legitimate and necessary measures to resolutely defend national sovereignty and security interests.”
The Trump administration on Monday notified Congress of plans for the sale of the Harpoon system, whose missiles are capable of striking ships and land targets. Boeing says the missile uses GPS-aided inertial navigation and delivers a 500-pound blast warhead. It can target coastal defense sites, surface-to-air missile sites, exposed aircraft, ships in port, and port and industrial facilities.
That followed another proposed sale announced Oct. 21 of $1.8 billion worth of weaponry, including missile and rocket systems, and upgraded equipment for Taiwan’s F-16 jet fighters.
Taiwan has long been an irritant in U.S.-China relations. Washington has no formal relations with the island’s democratically elected government but is its main ally. U.S. law requires the government to ensure Taiwan can defend itself. In recent years, weapons sales to the island have increased in quantity and quality, as China builds the world’s second most powerful military dedicated largely to defeating Taiwan and achieving its goal of annexation.
Stepped-up patrols by Chinese warplanes this year have put Taiwan’s forces under greater strain, increasing the importance of developing new weapons systems or buying them from abroad.
Beijing regularly pressures American companies including Boeing in an effort to influence U.S. policy. China is one of Boeing’s biggest markets for commercial aircraft, which might make it vulnerable to a boycott, but China’s defense ministry mentioned only Boeing’s military arm, Boeing Defense, not its civilian jetliner business. AP