Taliban vow to respect women, despite history of oppression 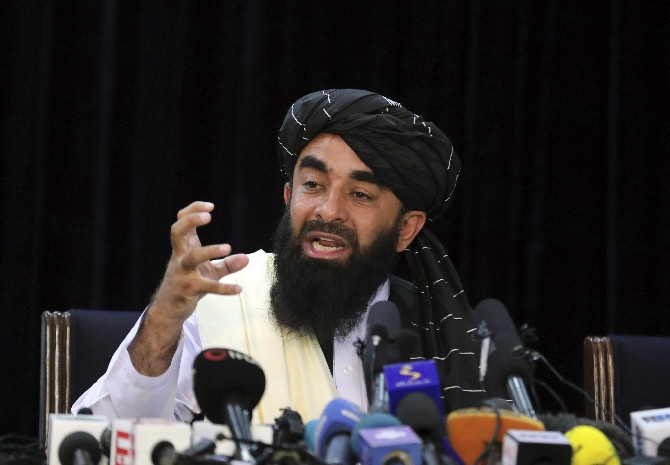 The Taliban vowed yesterday [Macau time] to respect women’s rights, forgive those who fought them and ensure Afghanistan does not become a haven for terrorists as part of a publicity blitz aimed at reassuring world powers and a fearful population.
Following a lightning offensive across Afghanistan that saw many cities fall to the insurgents without a fight, the Taliban have sought to portray themselves as more moderate than when they imposed a strict form of Islamic rule in the late 1990s. But many Afghans remain skeptical — and thousands have raced to the airport, desperate to flee the country.
Older generations remember the Taliban’s previous rule, when they largely confined women to their homes, banned television and music, and held public executions. A U.S.-led invasion drove them from power months after the 9/11 attacks, which al-Qaida had orchestrated from Afghanistan while being sheltered by the Taliban.
Zabihullah Mujahid, the Taliban’s longtime spokesman, emerged from the shadows in his first-ever public appearance to address those concerns at a news conference.
He promised the Taliban would honor women’s rights within the norms of Islamic law, without elaborating. The Taliban have encouraged women to return to work and have allowed girls to return to school, handing out Islamic headscarves at the door. A female news anchor interviewed a Taliban official Monday in a TV studio.
The treatment of women varies widely across the Muslim world and sometimes even within the same country, with rural areas tending to be far more conservative. Some Muslim countries, including neighboring Pakistan, have had female prime ministers, while ultraconservative Saudi Arabia only recently allowed women to drive.
Mujahid also said the Taliban would not allow Afghanistan to be used as a base for attacking other countries, as it was in the years before 9/11. That assurance was part of a 2020 peace deal reached between the Taliban and the Trump administration that paved the way for the American withdrawal.
The Pentagon said U.S. commanders are communicating with the Taliban as they work to evacuate thousands of people through Kabul’s international airport. It said the Taliban have taken no hostile actions there.
Kabul, the capital, has remained calm as the Taliban patrol its streets. But many remain fearful after prisons and armories emptied out during the insurgents’ sweep across the country. MDT/Ap