“I do not think it is melodramatic to say it might only be a matter of time before someone is killed in an incident with a Macau taxi driver.”

Macau used to be a taxi paradise not so long ago: taxis were cheap, reliable, mostly pleasant and available. Even if one didn’t speak the language, or didn’t have the right tones, taxi drivers would in most cases make an effort to get us to the place we wanted to go, safe and sound. A friend of mine used to say every time a taxi driver would question his Chinese accent while spelling out an address in Cantonese: “Right. Here’s another language purist!” And this would be the biggest problem for a non-Chinese speaker.
Those were very candid times in terms of traffic and public transportation.
The exponential growth of the last 10 years or so had too much of an impact for a city as small as Macau to handle. Now, the traffic situation has deteriorated to its lowest levels where passengers fear for their physical integrity when taking a taxi, or even when trying to do it – as seen in the outrageous case of Ms Azevedo and friends yesterday (reported above). 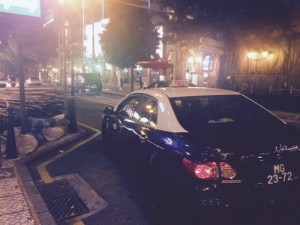 I myself have my own very recent taxi driver hatred story to tell, which may be important because it adds up to profile the bad examples in the cab industry.
About two weeks ago, I was trying to get a cab at the taxi stand near BCM Building in downtown Macau – probably the worst crossing when it comes to traffic. Just upon my arrival a group of 4 tourists was trying to get the taxi which had just arrived at the standing line with its duty light on. After a short argument, the tourists gave up, the driver switched off the “free” sign and stood there: parked right at the front of the line. As I was next in the queue, I approached the taxi man and I told him in English, pointing up to the sign: “If you are not on duty you cannot park here.” He replied very annoyed: “No English.” No English? Okay I’m going to call the police, said I while starting to take pictures of the taxi from the back to catch the license plate number (see picture).
Suddenly the driver started the engine, heavily hitting both the gas and the brake pedals at the same time, thus producing a disgusting black cloud of smoke directed right at me. He then moved away quickly from the taxi stand. I was appalled, but had no choice but to stand there for another 20 minutes till I got my ride.
From my office window I clearly see that waiting line every day. As I write these words, it’s around 8pm. I see a queue the length of the sidewalk, stretching about 30 meters. Black taxis approach the would-be-passengers in a slow march causing the cars behind them to honk and jam while they “fish” for an off-the-book ride. For a good 10 minutes, no taxi stopped at that taxi stand – none. They just don’t care.
So I don’t think Andrew Scott – quoted in the epigraph – is out of line when he says something tragic may happen if this situation prevails. Because what we are seeing here is our own version of the Scorsese/De Niro cult-movie. Only in this case instead of a psychopath we have a gang of organized “sociopaths” that, to say the least, have no sense whatsoever of their duty as providers of a service to the community, which is moreover, a public service.