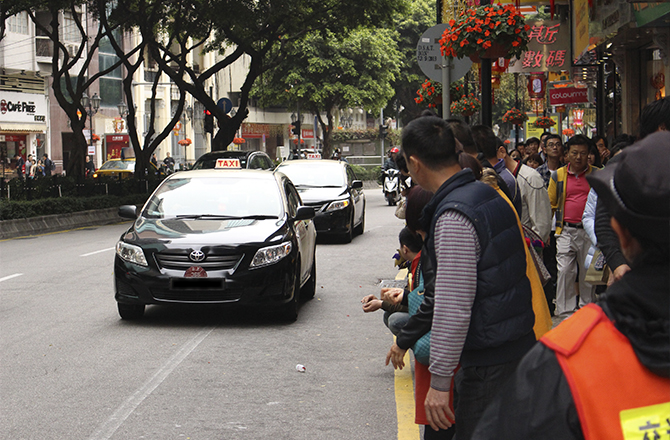 In June, 113 taxi offences were recorded by the Public Security Police Force (PSP), representing a 77% decrease compared to May. The marked decrease is said to be related to the implementation of the city’s new taxi law, which came into effect on  June 3.

In May, the number of violations related to overcharging, refusing to take passengers and other violations were 327, 121 and 45, respectively. In total, 493 taxi infractions were recorded in May.

Month-on-month decreases of 85.6% (47 cases) and 82.6% (21 cases) were recorded related to overcharging and refusal to transport passengers, respectively.

Forty-five cases involved other violations, including bargaining with passengers, dropping off passengers in improper places, not handing passengers’ forgotten belongings over to the PSP, and speeding.

“It can be seen that the new taxi law has increased the compliance of taxi drivers and it has brought an effective deterrent,” the PSP said in a statement.

“The police appeal to the taxi industry to comply with the requirements of the law [in] carrying the passengers, and to maintain the good image of Macau as an international tourist city and to protect the legitimate rights and interests of both the taxi drivers and the passengers,” the PSP said.

Meanwhile, yesterday Secretary for Transport and Public Works  Raimundo do Rosário said he has not yet received an application to hike taxi fares, but that the government is open to discussing the issue.

Recently, the city’s taxi drivers asked for a 15% increase in taxi fares to be implemented starting from the Chinese Lunar New Year.

They are seeking to increase the starting price, meter price and waiting fare by 15%, and an additional MOP15 fee is being proposed for rides in the first three days of the Lunar New Year.