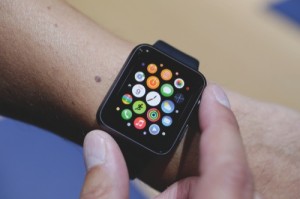 The smartwatch market will probably reach about USD10b in 2018

Swatch Group AG’s Tissot T-Touch Expert Solar watch has a compass, tells the altitude and runs on solar power. It costs USD1,250 – more than three times the smartwatch Apple Inc. unveiled on Tuesday, putting it squarely in the crosshairs of the tech giant’s latest gizmo.
While the Apple timepiece, which can do everything from opening your hotel room door to paying for a Big Mac, might eventually impact the whole USD60 billion Swiss watch industry in the fight for customers, analysts say it’s the lower-
end of the market that will feel the pressure first. The threat is biggest for small, independent watch makers and Swatch, which gets about a fifth of all sales from namesake plastic watches and the Tissot brand, they say.
“There can be little doubt Apple will quickly sell millions of devices,” Geoff Blaber, a vice president of research for the Americas CCS Insight, said in a note. “In a stroke, Apple has become a leader in smartwatches and massively raised consumer awareness of the wearables segment.”
Apple’s debut in the mobile-
phone business seven years ago upended the industry, creating huge demand for phones that could surf the Web, play music and offer games more sophisticated than Block Breaker. Nokia Oyj and Motorola Inc., the world’s two biggest mobile-phone makers at the time, barely survived the onslaught, fighting falling sales for years before finally being acquired.
Now it’s Switzerland that’s in trouble, Apple design chief Jony Ive was cited by the New York Times as saying last week, though he used a “much bolder term,” according to the newspaper. The Apple Watch will have a starting price of $349 while other models, including one sporting a gold band may cost more.
“Things aren’t going to look too rosy for smaller or more low-end watch brands,” said Ariel Adams, a watch blogger whose site A Blog to Watch gets 70,000 daily views. “In the short term, all but the most solid watch brands are going to suffer and money is simply going to be funneled away from them in anticipation of the Apple Watch.”
Swatch’s stock dropped as much as 2.7 percent yesterday, bringing its annual decline to 17 percent. Swatch Chief Executive Officer Nick Hayek and company officials declined to comment today to Bloomberg News. At an event in Zurich yesterday, he was cited by Tages Anzeiger newspaper as saying the company is “not nervous.”
Switzerland lost 60,000 watchmaking jobs in the 1970s and 1980s and many producers went out of business during the “quartz crisis,” when competition from Japan’s Seiko eroded demand for traditional, mechanical watches. Still, the industry recovered and exports of Swiss timepieces expanded to a record level last year.
The smartwatch market will probably reach about USD10 billion in 2018 from as much as $1.8 billion this year, Citigroup Inc. analysts have forecast, with half of the market in the future coming from traditional watch wearers switching to the tech devices.
That new competition will affect the low-to-mid-price segment of Swiss watches, which sell for less than 1,000 Swiss francs ($1,066) and represent 13 percent of the industry, according to Bank Vontobel. Swatch gets 20 percent of operating profit from such brands, according to J. Safra Sarasin.
“Tissot could be the one brand in the Swatch armory to be hit,” wrote John Guy, an analyst at Berenberg. He estimates the brand had 2013 sales of 1.1 billion francs.
The worst-case scenario for Swatch would be Apple selling 20 million smartwatches, leading to a 25 percent drop in volume of low-end watches at the Biel, Switzerland-based company and eroding operating profit by 11 percent, Barclays estimates.
Swatch’s Hayek didn’t seem worried about that earlier this year when he said consumers will resist buying smartwatches because of insufficient screen size and limited battery power. Smartwatches may also renew interest for timepieces in a younger generation that has started abandoning the habit of checking one’s wrist to tell the hour, he has said.
And while Hayek has said he’s skeptical for smartwatch prospects, the company plans a Swatch with fitness functions next year. The executive already even claims to have a couple of smartwatches in house. His company’s Breguet and Blancpain timepieces – which can cost more than $100,000 and some of which are covered with diamonds – are “smartwatches” because they make the wearer “look like a smart guy.” Thomas Mulier, Bloomberg