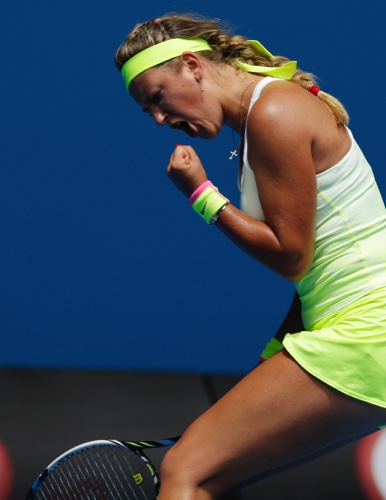 Victoria Azarenka is in an unfamiliar position as the Australian Open gets underway: unseeded after a long injury layoff and no longer a heavy favorite to capture a title she’s already won two times.
While much as changed for the Belarussian, one thing has remained the same — her opponent on the other side of the net yesterday. For the third consecutive year, Azarenka knocked American Sloane Stephens out of the Australian Open.
Their matches at Melbourne Park have all been one-sided — Azarenka has won all three in straight sets — but they haven’t lacked drama.
Two years ago, the two women faced off in the semifinals when Azarenka was the defending champion and Stephens a fresh-faced 19-year-old who had just upset No. 1-ranked Serena Williams in the quarters.
Azarenka was comfortably ahead for much of the match, but the momentum began to shift in the second set. Azarenka, appearing flustered, called for an extended injury time-out that was considered by many to be strategic. Azarenka went on to win the match and her second title at Melbourne Park.
Last year, the tension between the players was evident when Stephens icily described their relationship as “nonexistent” before they met in the fourth round. Despite her pre-match confidence, though, the result was the same: another Azarenka victory.
When the Australian Open draw came out this year, Stephens said she had a funny feeling.
“I knew I was going to play her. Of course, I’m not seeded, she’s not seeded and we’re going to play each other,” she said, before joking, “The draw’s rigged, I swear. I need to go talk to (tournament director) Craig Tiley because this is ridiculous.”
Both Azarenka and Stephens came into 2015 on the mend — and hoping for a good result in Australia to build on.
Azarenka played in just nine tournaments last year due to a left foot injury, causing her ranking to slip to No. 44 and for her to be unseeded at a major for the first time since the 2007 U.S. Open.
She said she still needs more matches to feel comfortable on court again, though she looked sharp in her 6-3, 6-2 win over Stephens as she guided backhand winners down the line and volleyed with crisp precision.
She even sounded like the Vika of old, pumping herself up with emphatic “Come ons!” and punctuating her shots with high-pitched hoots.
Can she hoist the trophy again this year?
“The dreams are always big, and I think that’s kind of the light in the end of the tunnel,” Azarenka said. “I don’t know if it’s going to happen here or whenever, I just want to work and have that mentality that that’s what I want to achieve.”
Stephens’ game, on the other hand, remains a work in progress. She is coming back from a wrist injury and is now on her third coach in the past year, Nick Saviano, who previously coached her when she was a rising junior.
She believes she’s due for a turnaround soon, particularly against Azarenka.
“I’m going to do my best and hopefully,” she said before stopping herself, “No not hopefully. I will beat her one day.” Justin Bergman, Melbourne, AP