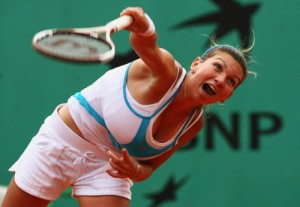 Top-seeded Simona Halep overcame 10 double faults and a tough challenge from Germany’s Annika Beck to advance to the second round of the Shenzhen Open with a 4-6, 6-4, 6-3 victory on yesterday.
Halep, last year’s French Open runner-up, was down a break in the deciding set before reeling off the final four games to clinch the match.
“It was my first match of the year, which is always difficult,” Halep said. “After the first set I knew I had to be more aggressive, hit the balls and open the court more, and I think I did it well.”
China’s top player, third-seeded Peng Shuai, was upended by Russian Vera Zvonareva, 4-6, 6-4, 6-3.
Zvonareva, a two-time Grand Slam finalist once ranked as high as No. 2, is back on tour after missing large parts of the last three seasons due to illness and surgery on her right shoulder.
The Russian, who hasn’t played since a third-round exit at Wimbledon last year, is currently ranked No. 250
“I had a lot of troubles over the past two years, two and a half really. I tried to come back last year, but it was too early and I had too much pain, so I had to take a break again,” she said.
“But I’m really happy with this win. I have no goals at the moment — I just want to be healthy and try my best in every match.”
Other winners at the tune-up event for the Australian Open included Slovenia’s Polona Hercog, a 6-1, 7-5 winner over No. 7 seed Monica Niculescu, and Serbia’s Aleksandra Krunic. AP