Tens of millions on the move for Lunar New Year 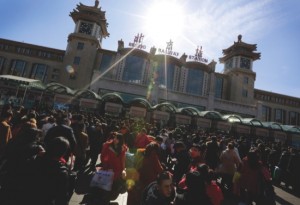 A new interactive map of China’s Lunar New Year travel tells a story of massive migration home from the big city.
The updating graphic posted online by the Chinese Internet portal Baidu shows a “heat map” of lines tracing the trips of individual travelers. The brightest spokes emanate from eastern employment hubs Beijing, Shanghai and the southern nexus of Shenzhen, Guangzhou and Dongguan.
About 80 million people were traveling on Monday alone, mostly by road, according to government estimates. Baidu was able to illustrate many of those journeys thanks to the 350 million active users of its smartphone map and other apps that use location positioning.
If someone uses a Baidu app in Beijing in the morning, then pings from the southwestern city of Kunming in the evening, a new trip will be registered and a straight line added from Beijing to Kunming.
Lines glow white-hot during the biggest travel days of the holiday, which officially runs from today through Feb. 24 but unofficially includes many days on either end. The period of heightened travel is considered 40 days long.
“You’re basically looking at the serious intensity of travel in this holiday. It’s not just the world’s biggest human migration, it’s the biggest mammalian migration,” Baidu spokesman Kaiser Kuo said. “It’s a sight to behold. It’s quite miraculous that nothing goes terribly wrong.”
The Baidu Migration interactive also includes data for individual cities, airports and train stations, and could help transportation officials plan future seasons, Kuo said.
If he used Baidu apps, 28-year-old Li Shengtao would have contributed to the Baidu interactive when he departed by train from Shanghai where he works as an interior designer for his annual, 1,100-kilometer journey to his northern hometown of Shijiazhuang.
“Even if you don’t manage to buy a ticket you have to get home somehow,” Li said. “That’s the tradition of us northern Chinese.”
The interactive has been employed for more than details on holiday travel. Last Lunar New Year season, some media outlets suggested, rather dubiously, that many of the bright lines on the map emanating from the city of Dongguan were prostitutes fleeing a crackdown there. AP