Tens of thousands march through Hong Kong in week six 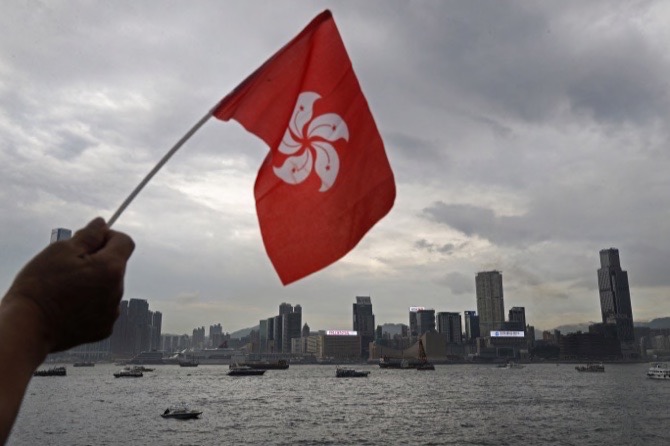 Tens of thousands of Hong Kong protesters marched through the city center to various locations including government headquarters and Beijing’s liaison office, ignoring a police-approved end point and defying a ruling that shortened the planned route.

The march marked the sixth straight week of anti-government rallies that have put increasing pressure on the financial hub’s administration. Organizers said 430,000 people turned out for yesterday’s march, while the police said 138,000 attended at its peak.

The marchers splintered off in different directions to gather at sites including outside Beijing’s liaison office in the city. Live TV footage showed some protesters spray paint over CCTV cameras and throw eggs at the building, before moving away as police cleared the area.

China’s national emblem, which adorns the front of the Liaison Office, was splattered with black ink.

Organizer the Civil Human Rights Front said the rallies, which have drawn hundreds of thousands of people, were held to show support for demands including the withdrawal of legislation that would allow extraditions to China, amnesty for arrested protesters and the resignation of Chief Executive Carrie Lam, who is backed by Beijing.

The Appeal Board on Public Meetings and Processions’ ruled on Saturday that the march, originally planned to end at the city’s Court of Final Appeal in Central, must finish in the Wan Chai district, citing potential difficulties in crowd control. Marchers ignored the ruling, and police retreated and shifted their barricades to allow the mass of protesters past the Wan Chai end point.

Shopkeepers along the route supplied marchers with water and other drinks as the temperature in the city hovered above 30 degrees Celsius. Barricades surrounding the police station in Wan Chai were converted into so-called Lennon Walls, spontaneous message boards adorned with brightly colored sticky labels.

“Free Hong Kong! Democracy now!” the protesters chanted, forming a dense procession through Hong Kong’s Wan Chai district as they were joined by others who had been waiting in side streets.

Protesters repeated the five points of their “manifesto,” which was first introduced when a small group of them stormed the legislature earlier this month. Their main demands include universal suffrage — direct voting rights for all Hong Kong residents — as well as dropping charges against anti-extradition protesters, withdrawing the characterization of a clash between police and protesters as a “riot” and dissolving the Legislative Council.

Protesters read the demands aloud in both English and Cantonese in videos released Saturday.

“We did not want to embark on this path of resisting tyranny with our bare bodies,” they said, “but for too long, our government has lied and deceived, and refused to respond to the demands of the people.”

Claudia Mo, a pan democracy lawmaker, said at the rally that protesters wanted Lam to pledge not to target people who took part in the rallies.

Lam earlier this month declared that the extradition bill was “dead,” but did not officially withdraw it, leaving open the potential for the government to revive it with 12 days’ notice and providing new momentum for protesters.

Bernard Chan, the convener of the city’s Executive Council, told Bloomberg in an email that there was little more the government could do to meet the demands of the protesters. “The government have already suspended the bill and Chief Executive has made very clear the bill is dead. I don’t see how it will ever reintroduce to Legco under this term or any term in the future.”

But many of the protesters argue that their government has not gone far enough.

“I think the government has never responded to our demands,” said Karen Yu, a 52-year-old Hong Kong resident who has attended four protests since they started. “No matter how much the government can do, at least it should come out and respond to us directly.”

Lam has vowed to use a more open manner to engage with the Hong Kong public and will concentrate on drafting a broad policy address for later this year, he added.

Kingston Cheung, a 17-year-old student who’s taken part in the protests since they started on June 9, said he marched on Sunday to voice opposition to the government’s handling of previous protests.

“The focus of the protests has been about the extradition bill, but we are also starting to see how the government and police have mishandled them,” he said. “The abuse of power by the police has added to the public’s anger.”

The march comes a week after attempts to clear a demonstration in the New Territories area of Sha Tin devolved into dramatic clashes between protesters and riot police inside a shopping mall – keeping the heat on Lam. Officers arrested more than 40 people.

“My fear is there will be an escalation of violence,” said opposition lawmaker Alvin Yeung, who was at the New Town Center in Sha Tin when the scuffles erupted. “It seems like everyone knows if this continues, somebody must die — either a protester or police officer. And then what?”

Crowds of protesters have turned out regularly in the former British colony since mid-June. In recent weeks their ire has focused on China, which continues to back Lam publicly despite a Financial Times report that said she had offered to resign but was told to remain and resolve the city’s chaos.

On Saturday, thousands of government supporters rallied in the city center in support of the police, with organizers estimating 316,000 turned out and police putting the figure at 103,000.

That followed news of three men, between the ages of 25 and 27, who were arrested in connection with the seizure of explosives, firebombs and other weapons in an industrial building in the Tsuen Wan district, according to a police statement. Officers found 2 kilograms of triacetone triperoxide at the scene, a police spokeswoman said.

Triacetone triperoxide has been used in terrorist attacks worldwide.

The Hong Kong National Front, a pro-independence group, said on its Facebook page Saturday that one of its members was arrested at the building.

Alick McWhirter, a senior bomb disposal officer, said the seizure of the explosives Friday was the largest of its kind in Hong Kong and called it troubling that such a dangerous substance was being made in a homemade laboratory in the middle of the city. 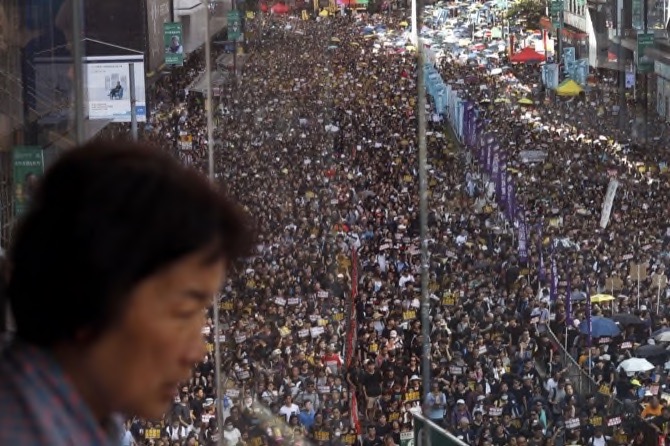 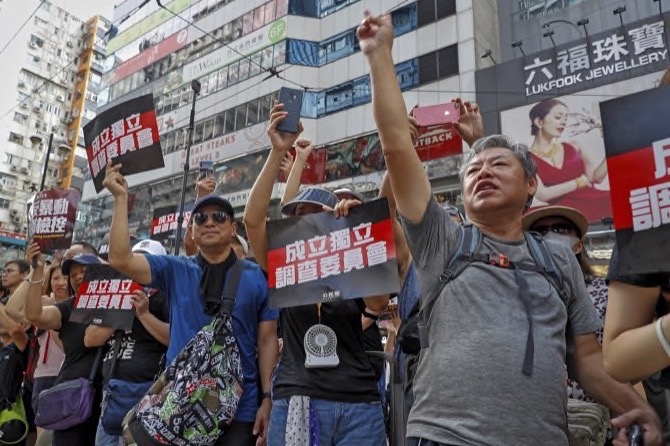 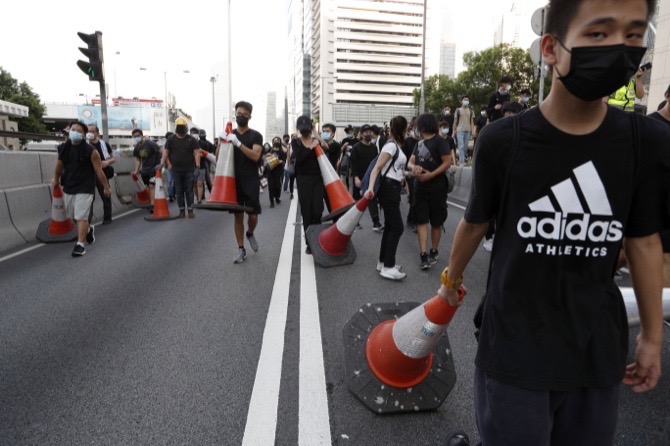