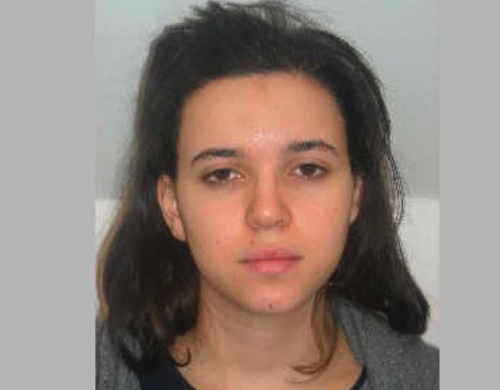 Hayat Boumedienne, the suspect in the kosher market attack

France yesterday ordered 10,000 troops into the streets to protect sensitive sites after three days of bloodshed and terror, amid the hunt for accomplices to the attacks that left 17 people and the three gunmen dead.
Prime Minister Manuel Valls said the search is urgent because “the threat is still present” after the attacks that began Wednesday with a massacre on the satirical newspaper Charlie Hebdo and ended when the three attackers were killed Friday in nearly simultaneous raids by security forces.
Meanwhile, France’s defense minister said the country is mobilizing 10,000 troops to protect the population. Jean-Yves Le Drian said the deployment will be fully in place by today, and will focus on the most sensitive locations.
Interior Minister Bernard Cazeneuve said 4,700 security forces would be assigned to protect France’s 717 Jewish schools.
The common-law wife of one of the attackers crossed into Syria on Thursday, the day after the Charlie Hebdo massacre, and the same day her husband shot a policewoman to death on the outskirts of Paris, according to Turkey’s foreign minister.
Mevlut Cavusoglu told the state-run Anadolu Agency yesterday that Hayat Boumedienne arrived in Turkey from Madrid on Jan. 2, ahead of the attacks and stayed at a hotel in Istanbul with another person before crossing into Syria on Thursday.
Video emerged on Sunday of her husband, Amedy Coulibaly, explaining how the attacks would unfold. Police want to find the person who shot and posted the video which was edited after the attacks were over.
“The work on these attacks, on these terrorist and barbaric acts continues … because we consider that there are most probably some possible accomplices,” Valls told BFM television.
Turkish intelligence tracked Boumeddiene from her arrival on Jan. 2. She and her traveling companion, a 23-year-old man, toured Istanbul, then left Jan. 4 for a town near the Turkish border, according to a Turkish intelligence official, who was not authorized to speak on the record.
Her last phone signal was on Jan. 8 from the border town of Akcakale, where she crossed over apparently into Islamic State-controlled territory. Their Jan. 9 return tickets to Madrid went unused.
Survivors say the Charlie Hebdo attackers, brothers from Paris, claimed they were from al-Qaida in Yemen, the group the U.S. considers the most dangerous offshoot of that network. In the video, Coulibaly pledges allegiance to the Islamic State group.
Ties among the men date back to at least 2005, when Coulibaly and Cherif Kouachi were jailed together. It later emerged that Cherif’s older brother, Said, fought with or was trained by al-Qaida in Yemen; Cherif, was convicted in 2008 along with several others in a network that sent jihadis to fight American forces in Iraq. Lori Hinnant & Sylvie Corbet, Paris, AP