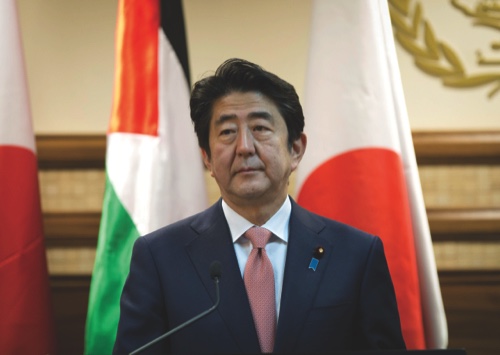 Japan is doing all it can to free two hostages the Islamic State group is threatening to kill within 72 hours, Prime Minister Shinzo Abe said yesterday, vowing never to give in to terrorism.
Abe returned to Tokyo from a six-day Middle East tour slightly ahead of schedule and convened a Cabinet meeting soon after.
“We are fighting against time, and we’ll make an all-out effort and use every diplomatic route that we have developed to win the release of the two,” he said.
Abe said he was consulting with leaders in the region. A convoy carrying a Japanese envoy, Vice-Foreign Minister Yasuhide Nakayama, left the Japanese embassy in Jordan’s capital Amman yesterday for an unknown location in the city. He was dispatched from Abe’s Middle East entourage to handle the situation.
Abe and other Japanese officials have declined to discuss whether Japan will pay the ransom for the captives, 47-year-old freelance journalist Kenji Goto and 42-year-old Haruna Yukawa, the founder of a private security company.
The Islamic State group demanded a USD200 million ransom in a video posted online Tuesday that showed a knife-brandishing masked militant standing over the two kneeling captives.
Government spokesman Yo-­shihide Suga confirmed that Japan believed the threat to be authentic.
“Japan’s aim is not to kill the Muslim people, as the militant group claims it to be,” Suga said. “We strongly urge them not to harm the two Japanese and release them immediately.”
Abe has limited choices, among them to openly pay the extremists or ask an ally like the United States to attempt a risky rescue inside Syria. Japan’s military operates only in a self-defense capacity at home.
Abe and other government officials have not said directly whether Japan was considering paying the ransom. But they remain adamant that Japan will continue to provide non-military aid to the region.
“We will never give in to terrorism,” Abe said.
In past international hostage situations involving Japanese, one Japanese has been killed while most have been released. It is unclear how many times Japan has paid ransom previously. The only confirmed case was in Kyrgyzstan in 1999.
Japanese media reported yesterday, citing unnamed official sources, that Goto’s wife received an email from an anonymous source on her mobile phone in December demanding a ransom of more than 2 billion yen ($17 million).
She exchanged several emails with the source, whose email address was similar to one used by the Islamic State group, the Kyodo News service and other media reported. The messages did not include a threat to kill Goto, it said. Elaine Kurtenbach, Tokyo , AP