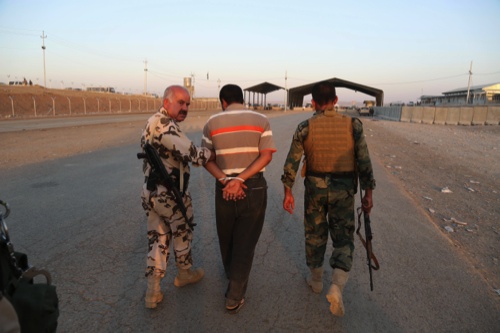 Kurdish Peshmerga fighters detain a man suspected as a militant for the Islamic State group, as airstrikes target Islamic State militants near the Khazer checkpoint outside of the city of Irbil in northern Iraq

Islamic State is attracting a growing number of militants from Southeast Asia to fight in Iraq and Syria, raising the risk they will return to carry out attacks in their home countries, according to a U.S.-based security consultancy.
As many as 200 Indonesians and at least 30 Malaysians have traveled to Syria to fight with the Islamic State and other rebel groups via third-party countries such as Egypt and Turkey, said the report by New York-based Soufan Group, which provides strategic analysis to governments.
Participation by Southeast Asian nationals in the conflicts poses a risk for those countries because just as the Jemaah Islamiyah terrorist group, which carried out the deadly 2002 Bali bombings, sent Indonesians, Malaysians and Singaporeans to Afghanistan for military training, these militants may return to use their training to mount terrorist campaigns, the report said.
“Southeast Asian extremists will continue to take advantage of the perceived success and strength of the Islamic State to issue more calls for the creation of a caliphate in Southeast Asia,” the report said.
The Soufan Group’s chief executive is Ali Soufan, a former Federal Bureau of Investigation counter-terrorism specialist. The Islamic State terrorist group, also known as the Islamic State in Iraq and the Levant, seizing on political drift in Iraq after April’s inconclusive parliamentary elections, grabbed swaths of northern Iraq in a campaign beginning in early June.
U.S. President Barack Obama has ordered U.S. forces to attack Islamic State positions in Iraq to try to prevent the slaughter of Christians and ethnic minorities by the militants.
The Soufan report said that in recent weeks leaders of extremist groups in Indonesia and Philippines have pledged baya’, or allegiance, to the Islamic State. There are signs that Australian nationals are also joining the fight.
Most significantly, the new acolytes include Abu Bakar Bashir, the former leader of Jemaah Islamiyah and founder of the splinter group Jemmah Anshorut Tauhid, the report said, citing a photo it said was circulating online of Bashir and other men posing in front of the Islamic State’s trademark rayat al-uqab flag inside an Indonesian prison.
Evidence, some shocking, that nationals are traveling to join terrorists is turning up around the world. The Australian newspaper this week ran a front page photo tweeted by Australian jihadist Khaled Sharrouf, who fled to Syria last year using his brother’s passport, showing a young boy holding what’s purported to be the severed head of a dead Syrian soldier.
Other groups have pledged allegiance, the Soufan report said.
The Abu Sayyaf terrorist group of the Philippines made the pledge in a video released on YouTube featuring long-time wanted extremist, Isnilon Hapilon, and 15 other militants standing in a circle in a jungle, the report said.
Hapilon reads from a script and his followers recite after him: “We pledge baya’ to Caliph Shaykh Abu Bakr al-Baghdadi Ibrahim Awwad Al-Qurashi Al-Husseini for loyalty and obedience in adversity and comfort.”
The Indonesian government has announced the banning of pro-Islamic State websites and propagation of its ideology, while Singapore has detained nationals who attempted to travel to Syria to fight with rebel groups.
Australian Prime Minister Tony Abbott’s government last week proposed legislation to strengthen powers to arrest, monitor, investigate and prosecute returning foreign fighters, prevent extremists leaving Australia and make it an offense to travel to certain areas without a legitimate reason. Bloomberg