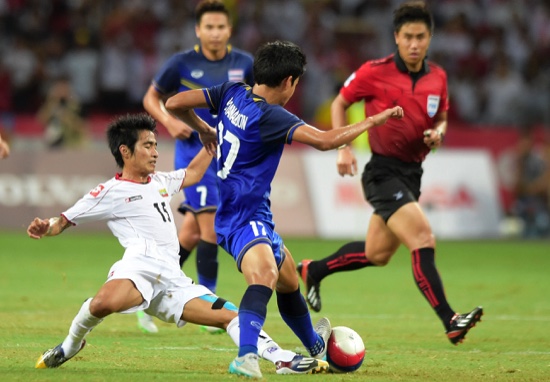 Hein Thiha Zaw of Myanmar, left, is tackled by Tanaboon Kesarat of Thailand, centre, during the soccer final at the SEA Games in Singapore

Two Southeast Asian Games dynasties were extended yesterday when Thailand beat Myanmar 3-0 to claim its 15th football title shortly after the Philippines wrapped up a 17th gold medal in basketball.
Defending champion Thailand entered the final after an unbeaten run, scoring 21 goals and conceding one and coming fresh off a 5-0 win over Indonesia.
Myanmar goalkeeper Phyo Kywaw Zin held them at bay with some excellent saves until Kesarat Tanaboon broke the deadlock for Thailand in the 54th minute with a shot from 13 yards after the defenders failed to clear a corner.
After having three shots stopped, Thailand forward Pombubpha Chananan finally found the back of the net when he poked a left-foot shot past the Myanmar keeper in the 64th, and Inpinit Pinyo made it 3-0 in the 78th.
Thailand has won 10 of the last 12 SEA Games tournaments, a run that includes wins over Myanmar in the 1993 and 2007 finals.
Coach Promrut Choketawee rated his lineup as the best Thai team to win a SEA Games gold medal and said it had the potential to play at the Olympics and develop into a combination that could take on the biggest teams in Asia. Overcoming the intense pressure of being a regular regional champion was part of the challenge.
“Thank you for the fans — I think now they can celebrate,” he said. “I hope the next SEA Games we can still win gold again.”
Myanmar hasn’t won since its golden run of five straight titles ended in 1973.
The Philippines has won all but one of the basketball titles ever contested at the SEA Games, the only break in the sequence occurring in 1989 in Malaysia. On Monday night, Rey Mark Belo had a game-high 22 points to lead the Philippines to a 72-64 win over Indonesia.
The latest football title gave Thailand its 93rd gold medal of the games, an unbeatable lead of 10 over Singapore and 20 more than Vietnam with one day of competition remaining.
Vietnam won the third-place playoff 5-0 against a deflated Indonesia, which now enters an international ban imposed by FIFA earlier in the month for political interference in the domestic running of the game.
Indonesia coach Aji Santoso said it was hard to lift his squad after a 5-0 semifinal loss to Thailand over the weekend, and with the FIFA suspension hanging over their campaign.
“Mentally it had a big influence,” he said, adding that planning for the future was difficult because there’s no limit on Indonesia’s international ban. “Very, very disappointing for the players — they don’t understand what they must do after this event.”
Indonesia was never really in the match after Hasamu Pranata was penalized for a handball in the area in the 13th minute and Vietnam forward Mac Hong Quan struck his spot kick to the left of goalkeeper Amiruddin Teguh.
Vo Huy Toan scored in the 21st and 41st minutes with powerful left-foot strikes, and a half-volley from Nguyen Nuu Dung as he ran toward goal in first-half stoppage time made it 4-0.
Vietnam captain Que Ngoc Hai deflected Do Duy Manh’s volley past Amirduddin in the 71st to round off the scoring.
Thailand claimed other gold medals with a 25-18, 25-18, 25-15 win over Vietnam in the women’s volleyball final, a 21-14, 21-10 win over Myanmar in the sepak takraw team women’s doubles final and an upset 5-4 victory over Singapore in women’s water polo.
On the penultimate evening of competition, Singapore held second spot on the medal table with 83 gold medals, followed by Vietnam (73), Malaysia (60), Indonesia (45), Philippines (29), Myanmar (12) and Cambodia (1). Laos, Brunei and East Timor did not top the podium. John Pye, Singapore, AP