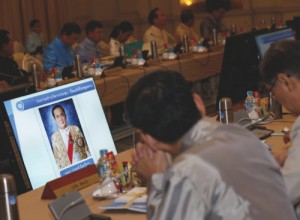 A portrait of Thai military junta chief and newly-appointed Prime Minister Gen. Prayuth Chan-ocha is shown on the television screen during the first cabinet meeting at Government House in Bangkok

An international human rights group yesterday called for Thailand’s ruling military to end what it says is a “disturbing pattern of repression” in the country since the army seized power in a May coup.
Amnesty International made the appeal in a new report, saying it has received credible reports that detainees have been tortured. The military has denied such allegations. Junta spokesmen did not respond to repeated phone calls for comment.
“Three months since the coup, a picture emerges from our investigations of widespread and far-reaching human rights violations perpetrated by the military government that are ongoing,” Richard Bennett, Amnesty International’s Asia-Pacific Director, wrote in the report.
“The Thai authorities should end this disturbing pattern of repression, end human rights violations, respect its international human rights obligations and allow open debate and discussion — all of which are vital to the country’s future,” he wrote.
The army said the May 22 takeover was needed to restore stability after half a year of political protests which had paralyzed the former government and triggered sporadic violence which left dozens of people dead and close to 1,000 injured.
Since then, the junta has tolerated no dissent and crushed open debate on the nation’s fate.
Amnesty said hundreds of websites deemed critical of the junta have also been taken down or blocked. “Censorship panels have been set up to monitor media and people have been threatened with imprisonment for posting anything deemed critical of the military online,” the group said.
At least 665 people have been summoned or detained by the junta so far, and a breakdown of those targeted indicated “a clear case of political persecution and an attempt to silence dissent,” according to the report.
The vast majority were politicians who opposed to the coup, along with academics, activists and protesters who have engaged in peaceful demonstrations. Only 51 were members of political groups who opposed the ousted government.
Although most of those detained were freed within a week, Amnesty criticized the fact they were held without charge or trials and security forces have revoked passports and detained or threatened to detain family members of those refusing to report.
At least 77 people are now facing trial — 60 of them in military courts with no right to appeal. Todd Pitman, Bangkok, AP