Thanksgiving celebrations have nothing on CNY 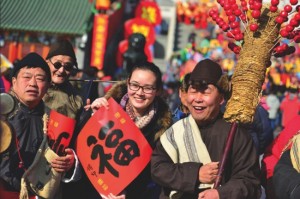 The Lunar New Year festival, which kicks off this week, is the biggest in Asia. Here’s how it stacks up against the Thanksgiving holiday:
About 2.8 billion trips will be made in China, including 295 million on board trains, according to government estimates. In the U.S., AAA Travel had projected last year that 46.3 million Americans will journey 50 miles or more from home during the Thanksgiving weekend, with more than 89 percent of those journeys by car.
Spending at retail and restaurants in the holiday week in China last year totaled 610.7 billion yuan, or almost USD100 billion. In the U.S., sales totaled$50.9 billion over the four- day weekend, according to the National Retail Federation.
Turns out, the Chinese also like to watch TV while eating copious amounts of food. The Spring Festival Gala, a variety show featuring dance, music and drama telecast on the eve of the Lunar New Year by the state broadcaster attracts 700-800 million viewers annually, according to CCTV’s estimates. By contrast, the top Thanksgiving football game last year drew an audience of 32 million. Rina Chandra, Bloomberg