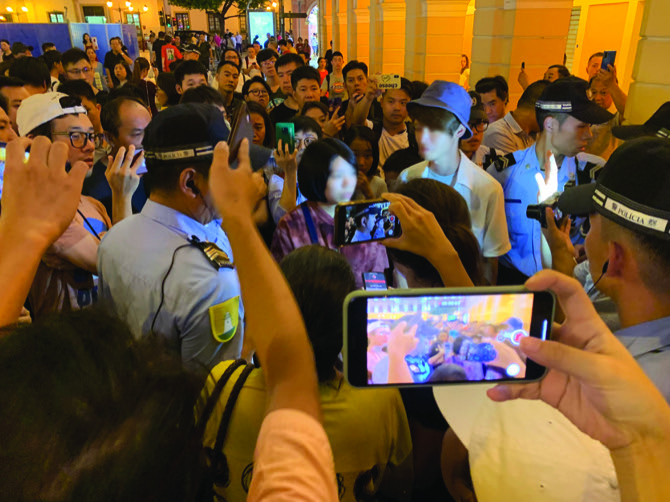 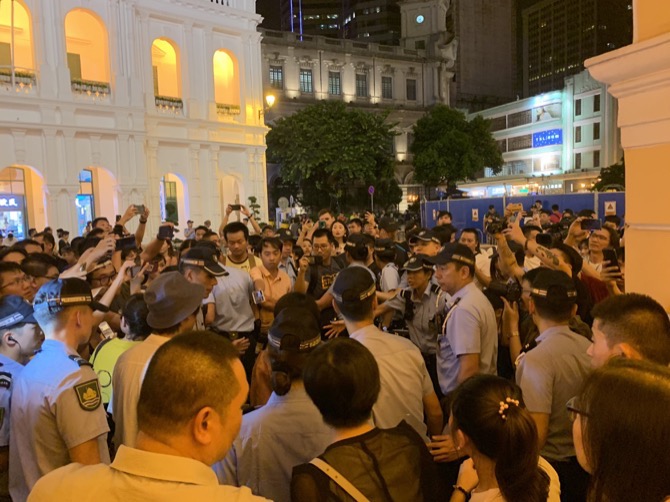 Macau security forces deployed at least six police minibuses as well as dozens of officers – some uniformed and others wearing plain clothes – to prevent an unlawful silent protest from going ahead last night.

The authorities wanted to ensure that a planned protest to draw attention to the conduct of police officers in Hong Kong did not go ahead. Permission to hold the protest was rejected by the governing authority last week and the activity was subsequently cancelled by its yet unidentified organizer.

The Times visited the square at around 8 p.m., when passers-
by in shirts of all colors could be seen occasionally stopping to take photos, hold conversations, shop or see the sights.

Police officers were stationed directly opposite the Municipal Affairs Bureau building, down the slope behind the Post Office and in front of the Tourist Centre, among other locations in Senado Square. They were seen checking the identification of pedestrians.

A man wearing a black T-shirt who asked not to be identified said that he had been checked three times before speaking to the media.

Tensions in the square rose after the police was said to have arrested a couple in their 20’s.

The couple told the media that the police wanted to check their identification cards. The police also requested to conduct a search of their bag. Two stickers were said to be found by the police. The content of the stickers was unclear and unverifiable, according to the police.

According to other journalists at the scene, the police used the word “arrest” at first. Once questioned by journalists about the grounds by which they were arresting the couple, the police opted for the word “investigation” instead. The couple was then taken up the slope next to the Post Office, Travessa do Roquete, where police officers made a human chain to cordon off the area and prevent access.

When the couple was moved to another location, one police officer at the scene repeatedly said that they had been invited to “assist in an investigation.”

Some journalists managed to squeeze in before the cordon was in force. Reports by Exmoo News show that the couple, along with others taken by the authorities, were brought to a car park on Rua da Sé.

A video taken by a Macau journalist shows more than two dozen people, either in black or white t-shirts, lined up facing the wall, hands visible behind each person’s back. Exmoo News also reported that some of these people were seen in possession of the Chinese national flag.

A friend of the couple under investigation said that he happened to be in Senado Square at the time. The 28-year-old male refused to be identified. He said, as far as he knew, the police confiscated the two stickers, and asked the couple to “wait for someone to bring them somewhere.”

“I came here for shopping and dinner with my girlfriend,” the man said. “I came here and then I saw the police standing around them. I just felt a little bit strange.” 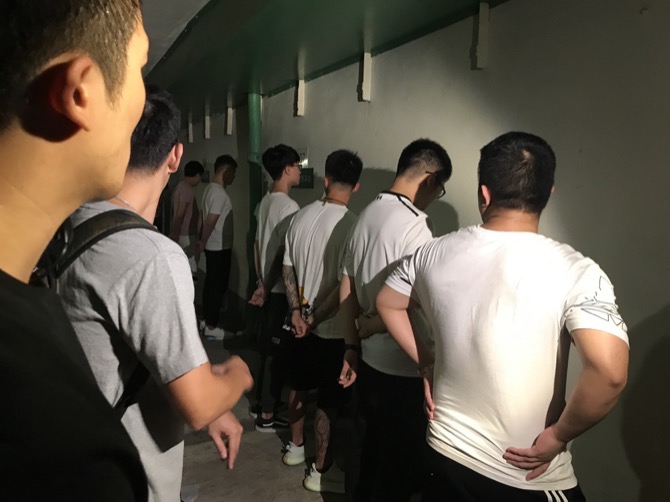 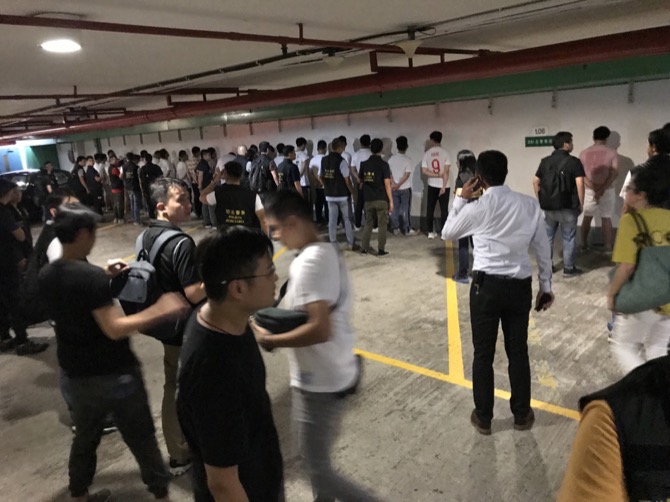 The Public Security Police Force circulated a text message to some Macau residents, including lawmaker Sulu Sou, to say that a total of seven people – four local, two mainlanders and one person from Hong Kong – had been escorted to the police station.

The Judiciary Police, on the other hand, sent a text message to registered journalists, saying that between 7 p.m. and 10 p.m. last night, the bureau deployed 26 inspectors for an anti-crime operation around Avenida do Infante Dom Henrique, Rua de Felicidade and Senado Square.

The message said it inspected a total of 30 people, but arrested none. The bureau did not explicitly say whether this operation was connected with the planned protest. Anthony Lam