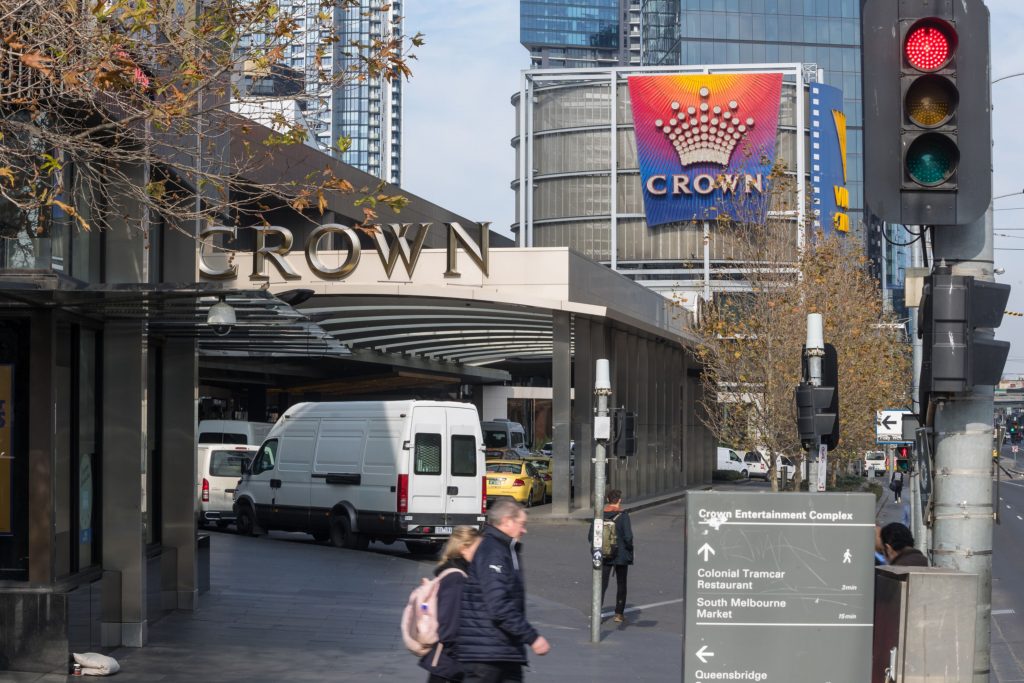 The Crown Resorts Ltd. logo is displayed at an entrance to the Crown Melbourne casino and entertainment complex in Melbourne, Australia (Bloomberg)

Crown Resorts Ltd.’s billionaire shareholder James Packer today (Thursday) acknowledged he knew that junket operations in Australian casinos were vulnerable to money laundering, and that there were rumors that some Macau junkets had links to organized crime. But he sought to bring Chinese high-rolling gamblers via junkets operators to its new casino in Sydney as part of a strategy focused on international VIP business.

The international VIP segment at the time was forecast to make up a third of the Sydney casino’s earnings. Packer wanted to copy the profitable Melco-Crown joint venture’s business model in Macau and woo junket operators for the Sydney casino.

“The upside in Crown Sydney was from the international VIP business,” Packer said in response to questioning.

While Packer agreed casinos in Australia could only deal with people of “good repute,” he was asked by Naomi Sharp, counsel assisting the inquiry, if he placed sufficient importance on that stipulation during his time at Crown.

“Not with the benefit of hindsight,” Packer replied

At the end of three days of testimony as part of a probe into money-laundering activities at Crown, Packer admitted that the company’s compliance regime has been a “failure” and agreed restructuring of Australia’s largest casino operator is needed to keep its Sydney license.

Packer agreed the compliance unit should be separated from the profit centers of the business, and the board must think about “who the right people are for the right jobs.” Further, the board will be “more independent than it has in the past” and the probe’s recommendations should consider caps on shareholdings, he said.

“I won’t be going on the board again,” said Packer, who stepped down as a director in 2018 but currently owns about 35% of Crown. The inquiry that’s exposed the company’s significant governance failings “has been a terribly painful and terribly shocking experience for the board, as it has been for me.”

In a report expected early next year, Bergin will recommend if Crown should lose or keep its Sydney license, or make governance and operational changes in order to operate a casino. Its A$2.2 billion ($1.6 billion) Sydney harborside gaming development is due to open in December.

Lawyers acting for the inquiry have raised questions over Packer’s role at Crown and the ensuing ethical and corporate governance issues, continually showing that he held sway over operations even after stepping down from his roles. In Wednesday’s testimony, Packer said he accepted responsibility for “some, not all” of the failings.