The Yellow Wine from France

ProvenceAlpesCôte d’Azur comprises 6 départements, or 2 wine regions in Vallée du Rhône and Provence, each being a cluster of AOCs. At a recent tasting of Le French GourMay 2018, however, it was Provence that grabbed the most attention, for the alluring colour and effervescent vitality of its rosés were hard to resist, in addition to some rock solid Mourvèdrebased reds. The star of the tasting, however, was a producer of yellow wines from Provence. Not vin jaune, but rice wines from Provence that resemble but differ from both Chinese huangjiu and Japanese sake.
France produces extremely little, if at all any, rice wine, and its limited rice production is largely confined to the surroundings of Camargue, south of Arles, known for its Roman heritage and Vincent van Gogh’s paintings. The man behind this audacious, borderline unthinkable, project is Olivier Sublett, a Bordeaux négociant from SaintÉmilion, whose family has been making wine since 1822. On a business trip to China back in 2013, he saw for himself the impact Xi Jinping’s anticorruption campaign had on the wine market, and he also encountered Chinese huangjiu for the first time.

“A lot of efforts and thoughts have been spent while making these rice wines. The name ‘Le Guishu’ contains 2 elements: ‘guishu’ is osmanthus in English, or Olivier de Chine in French, which is also my name; meanwhile, ‘le’ rhymes with ‘happiness’ in [Mandarin] Chinese.”
Olivier Sublett

Having returned to France, Olivier Sublett began making rice wine as a hobby, but initial results were not encouraging. With advice from Bordeaux-based oenologists on acidity, balance and flavour, as well as suggestions from cognac producers and brewers from Carlsberg, the experimental first and finer second editions of his rice wines were released, which made an instant impact on the French market.

Made with 3 varieties of long grained table rice from Camargue, the resultant rice wines are neither huangjiu nor sake, but something in the middle, catering to the both wine lovers and casual drinkers alike. Stylistically, the rice wines are closer to wines than cereal wines, and their versatility is as such that they can be served at various temperatures, and can even be made into cocktails. Samples supplied by Le Guishu, the first and so far only rice wine producer in France. W: www.yellowwine.fr; E: osublett@aol.com 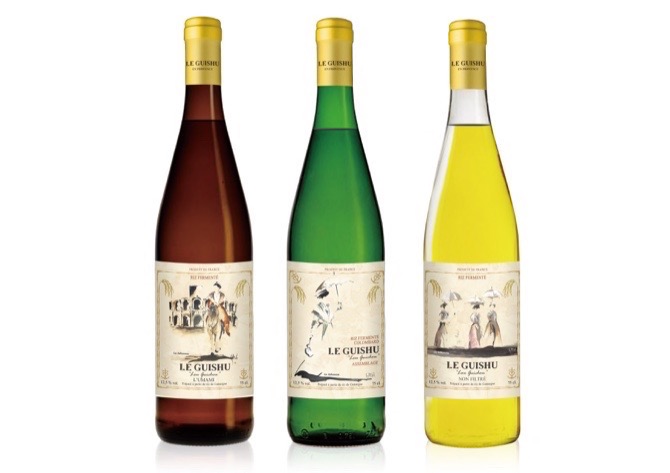