Third round of masks sale starts today, first including children 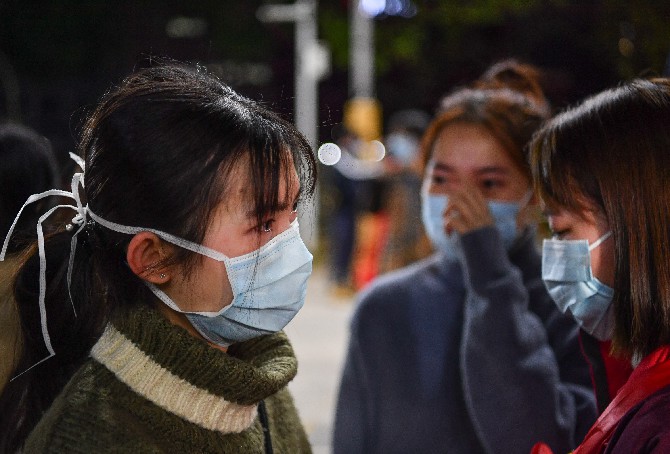 The third round of distribution for protective face masks acquired by the government launches today. For the first time, this round of distribution will include masks specially for children aged between three and eight years, the Clinical Director of the Conde de São Januário Hospital Center (CHCSJ) and member of the New Coronavirus Contingency Coordination Center, Lei Wai Seng informed yesterday at the daily press conference to update the media on the novel coronavirus outbreak.
“This time, we have acquired children’s masks for the population […] suitable for those aged 3 to 8 years old and that can be acquired exclusively at healthcare centers,” said Lei.
The clinical director added that the limit of 10 masks per person remains in force, suggesting that people can acquire five masks in the children’s size and another five in the adult size. According to the information released yesterday, each ID holder can only buy a maximum of five children’s masks every 10 days.
Lei also urged the population not to rush to the sales points, stating that there is enough stock and people can be served easily.
“We appeal to citizens not to gather in long lines at the masks’ sales points this time because we are trying to avoid as much as possible the gathering of many people in the same place to avoid infections,” he added, calling on people to check their stock of masks and to acquire new ones “as late as possible.”
Lei also noted that the government has been making an effort to find suppliers of face masks worldwide, and that as in the first two rounds, the masks being distributed might be of different colors and even include some activated charcoal or prints. He said, “no matter what colors the masks will be, even if they have any prints, all masks are of quality and have protective capacity.”
Lei also informed that all the health services, including the public hospital and the healthcare centers, will stop distributing free face masks to people that arrive at these venues. The measure aims to conserve, where possible, the stock of face masks at each service for the use of the medical staff.
“People by now must have their own masks [supply] and they should wear them when they leave their homes. Our masks will be saved to distribute to our staff,” Lei said.
He also raised an observation of health authorities that some people are regularly visiting healthcare centers to obtain face masks for free. This is an unfair practice that the authorities also want to end.
Also yesterday, another member of the New Coronavirus Contingency Coordination Center, Lam Chong, updated the media on the 29 people overseas who were both found to be infected with the virus and had either traveled or worked in Macau at some point during the incubation period of the disease.
Lam said that none of the cases are thought to constitute a high risk of contagion to the Macau public. After an investigation into the travel history and details of the infected, most of the cases should be related to infections inside their family circle.
Of the most recent cases reported on Monday, two people tested positive for the virus in South Korea after a trip to Macau (more on p4).
“The case is still being investigated but we can say that [the two people are] a couple in which the wife is a Chinese national and who, before traveling in Macau, had been in the mainland,” said Lam. “She would have been infected in China as when she entered Macau, she already had symptoms of the disease. She would also have infected her husband at a later stage.”
Questioned on the fact the health authorities admit that the woman entered Macau already with symptoms, Lam replied, “She had some symptoms but [only a] very light cough that […] did not suggest that she would be of potential risk since she had not been in Hubei Province.”
Lam also informed that the health authorities have already managed to reach 23 people that traveled on the Air Macau flight that the couple boarded to Seoul on January 31. According to the information collected, none of the interviewed passengers have any symptoms of the virus.
However, three crew members were found to have had close contact with the patients and were recommended to be quarantined.
A third person involved in the case, who is a Macau resident, is still in South Korea where the health authorities say that he is considered unlikely to have infected others. “We managed to reach his family in Macau, as he is not in Macau at the moment. The family says he is well and has no symptoms,” Lam reaffirmed.
Meanwhile, regarding the case of the Malaysian resident, the Health Bureau (SSM) ascertained that the man formerly worked for the City of Dreams property and his work required frequent travel between Macau and Zhuhai. The probability of the Malaysian resident having infected other people locally is also considered low as he only started to have symptoms two days after being back in Malaysia.

Medical staff not forbidden from speaking to media

The medical staff of the Conde de São Januário Hospital Center (CHCSJ) are not forbidden from speaking to media outlets, the Macau health authorities claimed yesterday in reply to a media inquiry on the topic.
According to the Clinical Director of the CHCSJ and member of the New Coronavirus Contingency Coordination Center, Lei Wai Seng, “our professionals are not forbidden or prohibited from presenting any comments or statements at the media outlets according to their professional specialties.”
“Nevertheless, this Wuhan pneumonia is an ongoing epidemic so what we urge is that our staff members communicate with us to warn us that they will have an interview or make some comments to media outlets. But we don’t have an order to forbid them from speaking,” said Lei.
“We also have press conferences every day at 5 p.m. and if the journalists want to get any information, they can use these [occasions] to ask questions.”
Lei added that in cases where media wants to organize an interview with a particular specialist or on a specific topic, they should, “reach us [the Health Bureau] so we can organize a seminar for all journalists of all language media.” RM