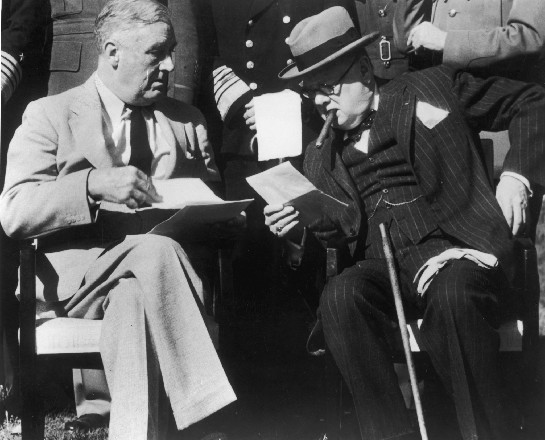 The Prime Minister, Winston Churchill, has spent the last few days in top-secret meetings with the American President, Franklin D Roosevelt.
Details of the meetings only emerged after the announcement of a joint declaration by Britain and America on the basic principles for a post-war world, sealing the alliance between the two countries for the downfall of Hitler.
The document, known as the Atlantic Charter, consists of a list of eight undertakings.
Britain and the United States seek no territorial gains from the war
any changes to a country’s territory should only happen with the agreement of the people living there
it is the right of everyone to choose the government under which they will live
self-government should be restored to those who have lost it
there should be free trade between all nations
improvements in the economy and in living standards should be available to all
there should be peace following what the Charter calls “the end of Nazi tyranny”
peace should enable freedom of movement around the world
a belief that aggressive nations must be disarmed if the world is to live at peace

Rumours of high-level talks have been rife for weeks in the American press following the sudden disappearance from Washington of Mr Roosevelt and several top US officials.
Mr Churchill’s unexplained absence from the House of Commons during a statement on the war situation on 6 August had also attracted some attention.
It turned out both men were involved in at least three days of intensive talks on board the American cruiser, USS Augusta, and the British battleship, HMS Prince of Wales, anchored in Placentia Bay in Newfoundland.
It was the first time Mr Churchill had met Mr Roosevelt as heads of their respective governments, and their discussions were thought to have covered several other matters, such as the German invasion of the Soviet Union in June, the supply of weapons under the Lend-Lease Act, and the threat to Britain’s lifeline in the Battle of the Atlantic.
Although the Charter is clearly an undertaking for the two countries to co-operate after the war, it stops short of anything which might bring forward America’s participation in the war.
But as Japan continues to build up her fleet in the Pacific, speculation has been growing as to just how long the Americans can stay out.

Within four months, the United States was at war. The Japanese attacked the US naval base at Pearl Harbor on 7 December 1941, and Germany declared war on America soon after.
President Roosevelt became a key player as one of the “Big Three” Allied leaders with Winston Churchill and Soviet leader Joseph Stalin.
The friendship forged at Placentia Bay formed a firm foundation for a series of crucial strategy conferences throughout the war, culminating in the Yalta conference in February 1945.
It later emerged that a key issue during the Atlantic Charter talks was President Roosevelt’s mistrust of Britain’s imperial ambitions.
He saw the fight against Nazi occupation as extending to ensuring the freedom of colonial people from rule by imperial powers – including Britain.
The Charter, especially declarations two, three and four, laid the foundations for the granting of independence to Britain’s Empire which began with Indian independence as early as 1947.